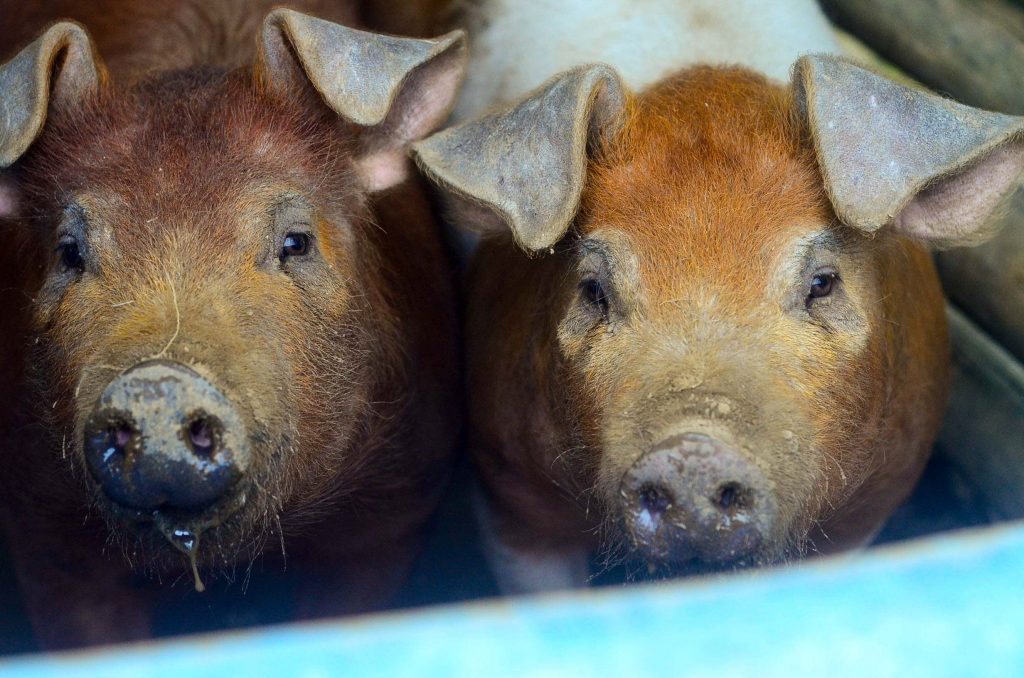 I feel like I could fairly easily write a book on how NOT to farm. The way NOT to do things. The way NOT to try and keep pigs contained, for example. And still, here I am, talking about lessons in raising pigs.

Ladies and gentlemen – if you're looking for a fencing option that will allow your pigs to escape, tramp around the pasture like crazy teenagers at their first party with alcohol and cause a large pregnant lady to run around the hillside swearing and talking to herself like a madwoman, look no further! This is the blog for you.

A thousand articles assured me that they would become trained to the hot wire fence and would respect the boundaries of the acre pasture that we oh-so-lovingly fenced in for them. Welp. They didn't.

A thousand other articles assured me that should the hot wire fail, they would most assuredly respect four strands of barbed wire. Welp. They didn't do that either.

So as I stared at those four hams, now cut up from barbed wire, running down the pasture hill – away from me – I contemplated an early weenie roast. After all, surely I could hit them with my rifle from this far. They weren't moving fast enough to escape a well placed bullet and after all, I'm sure that a small pig would taste just as delicious as a large pig. And then I wouldn't have to haul my pregnant self down that giant hill to try and push them back on up it. Plus, how does one even try and get a pig back into a pen that has no gate and is surrounded by four strands of barbed wire and electric fence? Not easily, that's how. 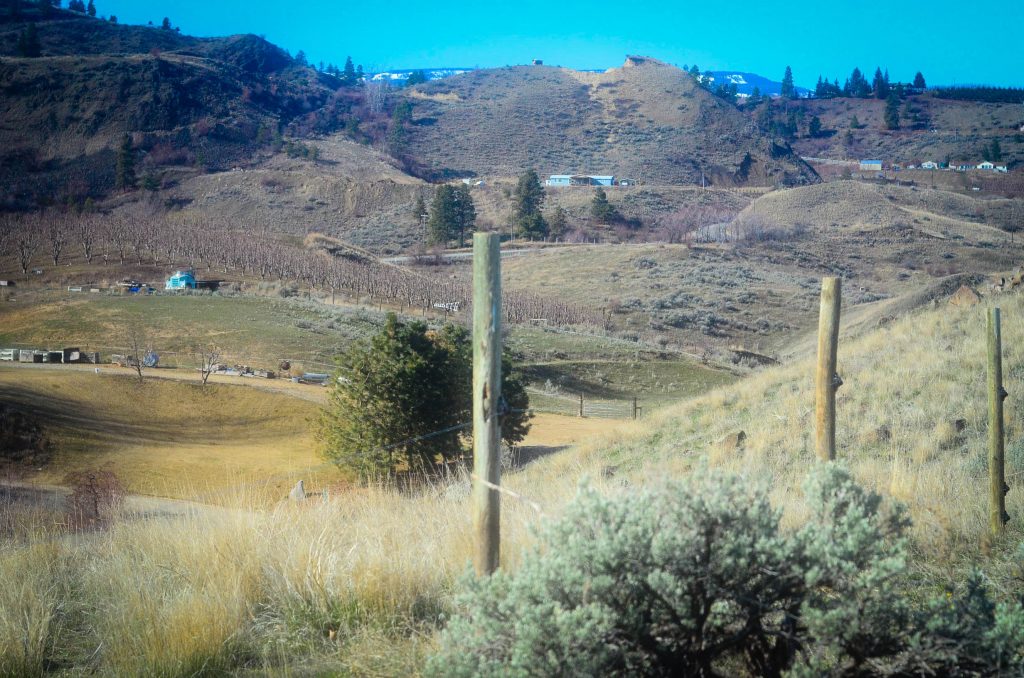 Being a bovine person myself, I am familiar with the characteristics and herding traits of cow. Sal has been in this hot-wired pasture loads of times and always lovingly respects the boundaries that the wires set. What  a good ‘ol girl. Pigs on the other hand, I've learned, are far less sensitive towards pleasing their human counterparts. They're like fat ‘ol bullets aimed directly at wherever you don't want them fired. Looking back on preparing for the pigs, I realize how much I relied on (and expected) the hot wire fence to be foolproof. I expected the pigs to treat it like a cow would.

I know many readers have had success with electric fences. We, however, did not. 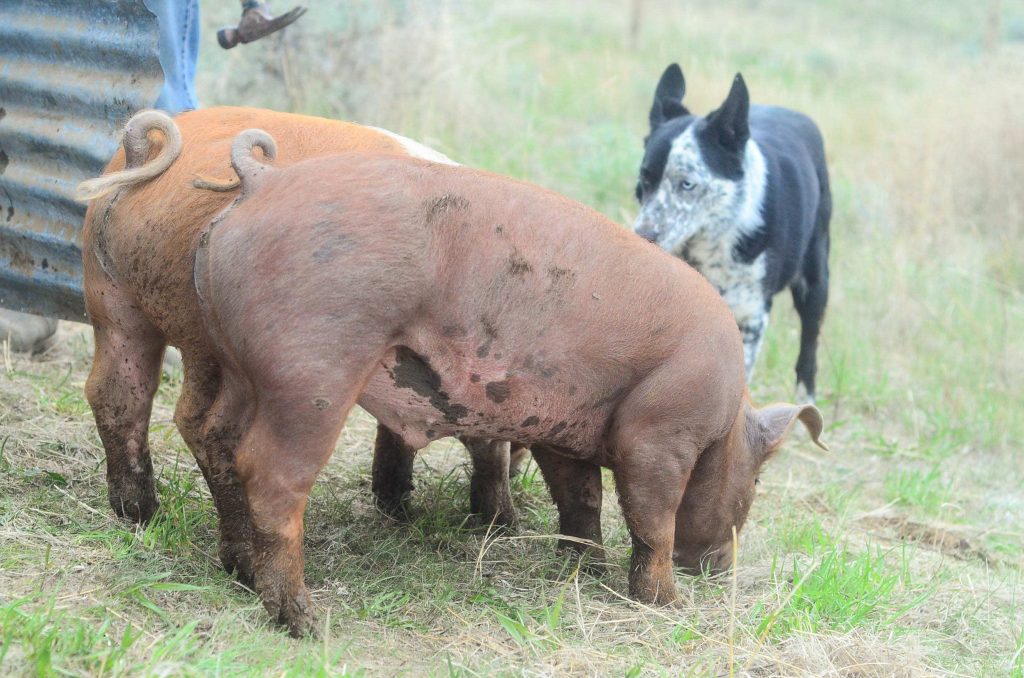 By the way, have you ever tried to herd a pig?

It's sort of like trying to give a feral cat a bath in your kitchen sink. You can image the chaos that ensued. But if you can't, I'll paint a few images for you:

– Grown, holy people swore. It's amazing how escaped and non-cooperating livestock can make the expletives slip.

– A pig squeal sounds incredible close to a human being slaughtered (or what I image that would sound like) so as we breathlessly chased them back up to their shelter, the sound echoing from the farm was similar to that of an Alfred Hitchcock movie.

– I was breathing so hard running up and down the hills attempting to gather the pigs up that I swear, you could have heard the wheezing from a space shuttle headed for Mars. My heart was pounding. My adrenaline was kicked in. And all I could think about was not vomiting from exhaustion. It's hard for a big-belled Mama like myself to sprint uphill. In fact, I shouldn't say it's hard. I should say it's humanly impossible. 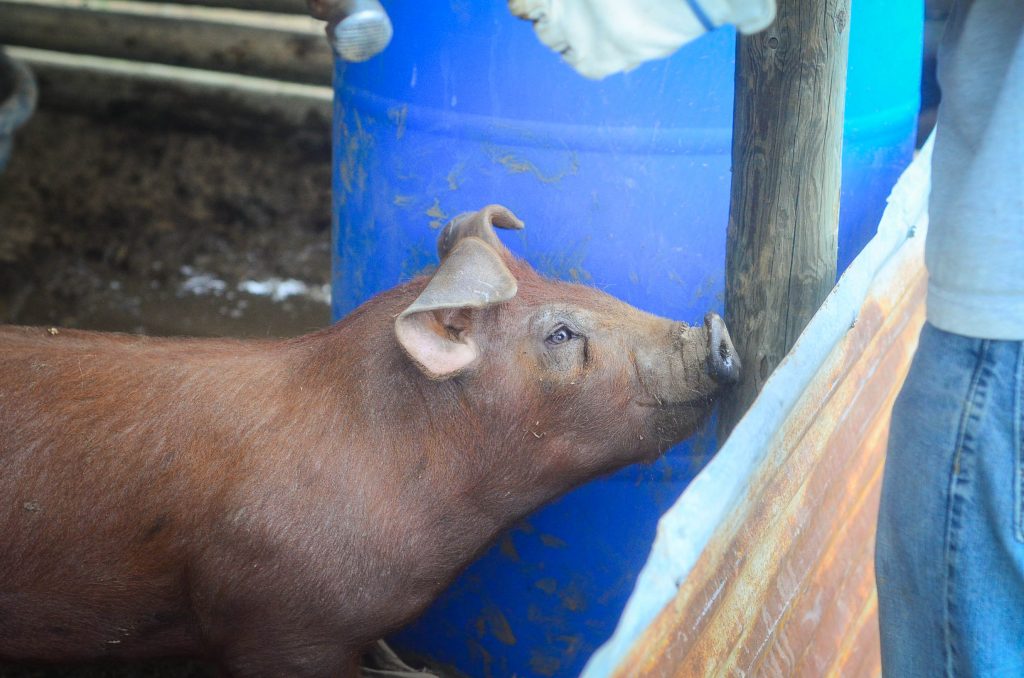 As easily as the pigs managed to torpedo through the barbed wire fence that we'd just spent three and a half hours putting up, I assure you, human beings do not go through quite so easily. I've got a thrashed wind breaker, cut up thighs, and tattered pair of sweatpants to attest to that truth.

Apparently I was quite naive in thinking that these animals would respect a spiky wire. They could have cared less. They forced their way right through it – cutting slashes in their back and bellies in the process. Shouldn't physical pain stop them? One would think. But it certainly didn't deter them. That blade of grass on the other side of the fence was so tempting, after all. Because it's not like they didn't have the EXACT SAME GRASS ON THIS SIDE OF THE FENCE. 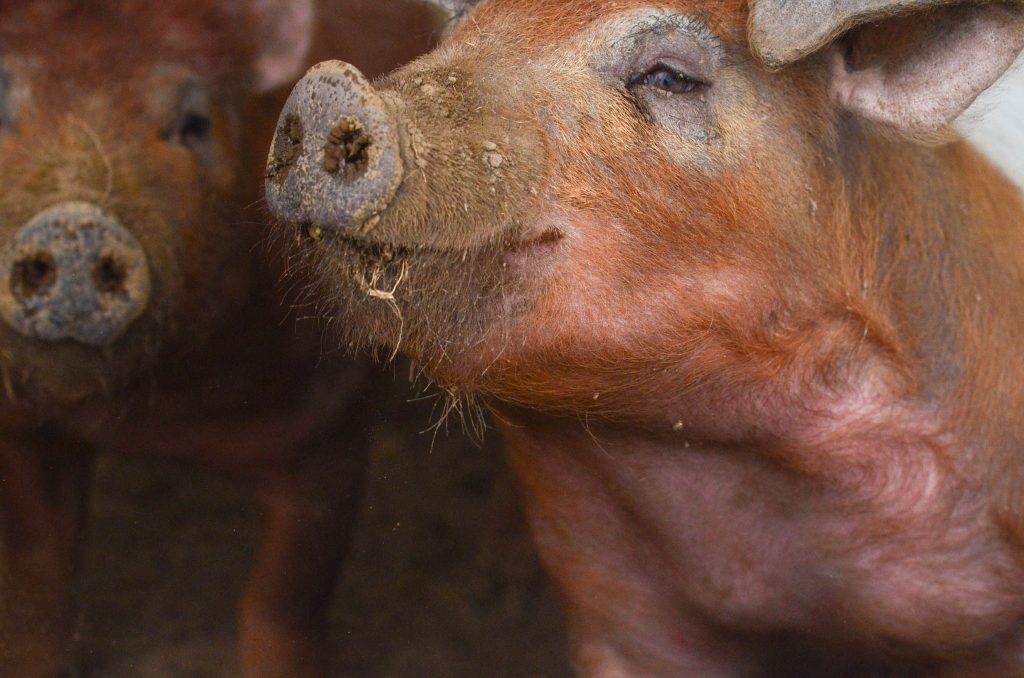 Don't smile at me like that Wallace. I'm not in the mood for your shenanigans.

The Result of My Lessons

The pigs have lost their pastured privileges. As much as I'd like for them to graze the hillside, I'd like them to remain on our property, out of neighbor's orchards, and alive much more. Thus, they've been confined to a 650 square foot “Pig Pen” which was made off of their existing shelter. Because we couldn't think of another way to contain them properly, we simply sunk new fence posts and ran rails down the sides at three different heights. Unless the pigs can plow through a 4″ round post and railroad nail, they should be stuck in there pretty well. I'm just praying that they continue to mind their remaining manners and keep from rooting too deep in the soil – essentially, building a tunnel under the fence. Luckily we keep a pretty close eye on them, so we can usually spot the holes before they amount to much.

Though, let's face facts here, I've been wrong before.

On the up side, our acre of land will not be irrigated as pasture for the sheep and dairy cow. They'll make more use out of it anyway, since they are both grazers by nature. Grass is very important to them and I'm thankful to have more of it for them to munch on. Happy cow, happy farm.

As a small homesteader, the investment we've put into each animal represents a significant amount to our farm. Each of these pigs already has an initial purchasing cost and feed cost thus far and though they're far from harvest, it's still essential that we keep them alive and healthy until butchering. An escaped pig is not a safe pig and most likely won't stay alive for long out here, where coyotes and mountain lions roam freely. Containment, at this point, is for their own good. And I'm satisfied that they still have plenty of space to… ya know… do whatever it is that pigs do.

Besides run freely through the pasture like a streaker at a baseball game.

This pregnant lady can't take too many more pig-chasing-marathons. 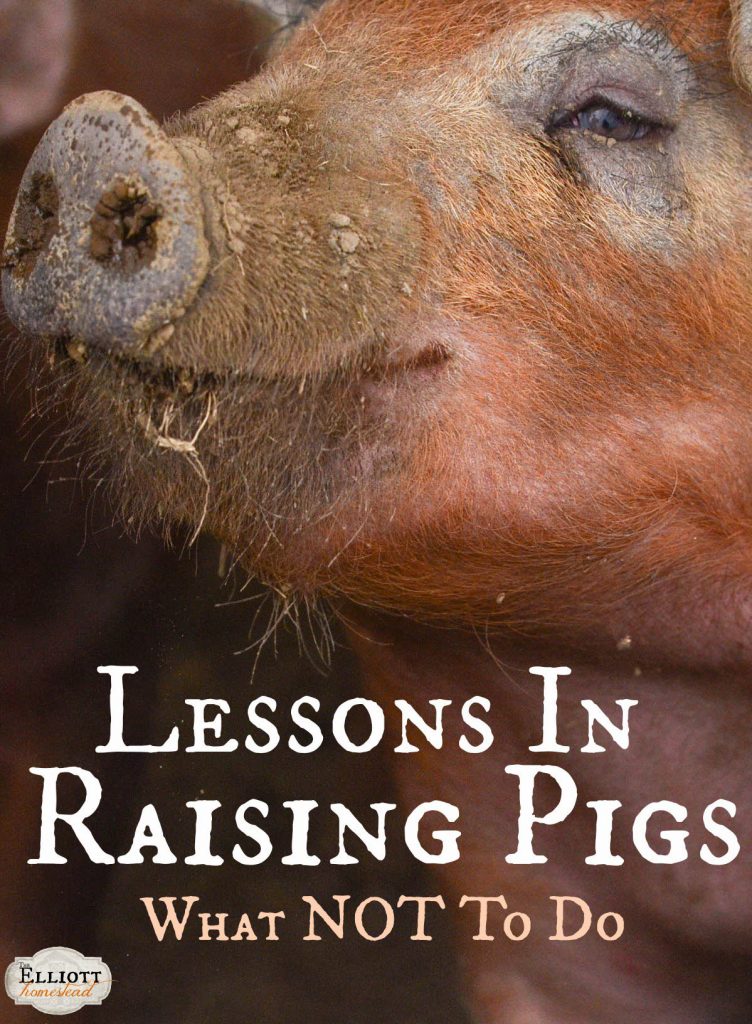 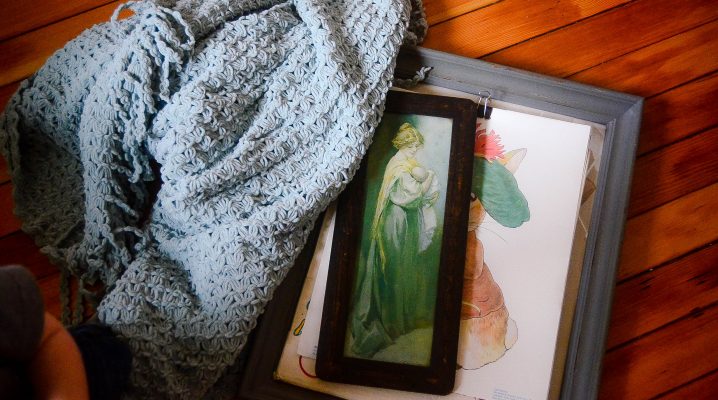 I’ve got to cheer myself on with the progress that we’ve made in the house thus far – especially the vintage nursery we’ve been working on! We’ve been at The… 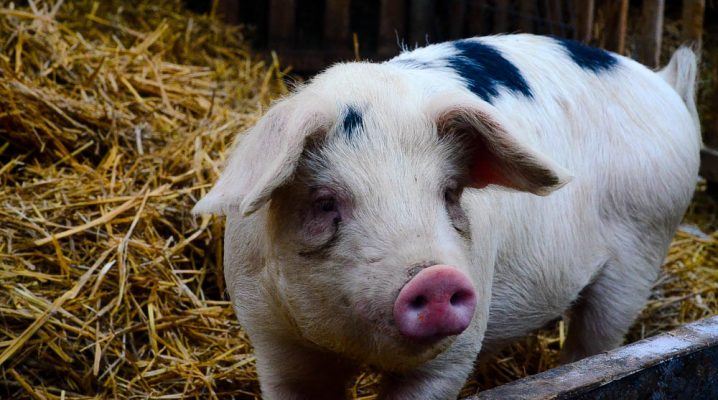 Hello. Can you hear me? Or is my voice muffled through the foot and a half of fresh, powdery snow that is currently covering the homestead? I hope you can… 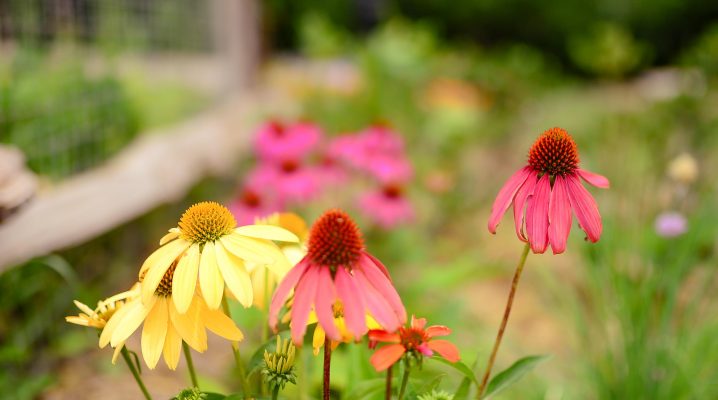 We are in the depths of full-on cottage styling here these days. Yes, there is a vegetable garden that needs to be weeded. Yes, the flower beds could use an…