This past weekend, we welcomed fifty new critters onto the homestead.

And I'll be danged if they're not the cutest little creatures in the entire universe. Too bad I'm going to eat them. And too bad that's true – but it totally is. 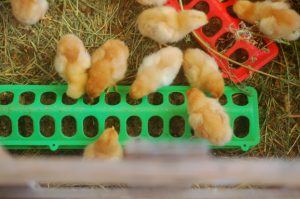 Fifty Rainbow Rangers will be living on Beatha Fonn with us for the next 8-10(ish) weeks while they fatten. They'll graze the hillside where the grapes will be planted in the spring, devour what I'm affectionately referring to as the Mercedes of grower feed, and provide us with plenty of fertilizer and meat for the upcoming year.

As many of my Facebook fans know, I spent hours and hours trying to come up with a homemade broiler feed recipe to serve alongside the homemade feed that we already make for our layers. While I was finally able to calculate a formula that utilized local(ish) resources, the cost of protein was just SO expensive. Around here, without utilizing the commercial favorite of genetically modified soy beans, my best option for protein was fish meal and crab meal. But the cost was just too prohibitive. By the time that I crunched the numbers, my homemade feed at best would be about five cents per pound cheaper than the super-awesome (yes, I said super-awesome) Mercedes of chicken feed that I was lustfully eyeing at my local feed supplier.

Not worth it, in my opinion. Though is still may be for some – I wasn't willing to commit the time and effort to save $5 at the end of it all. 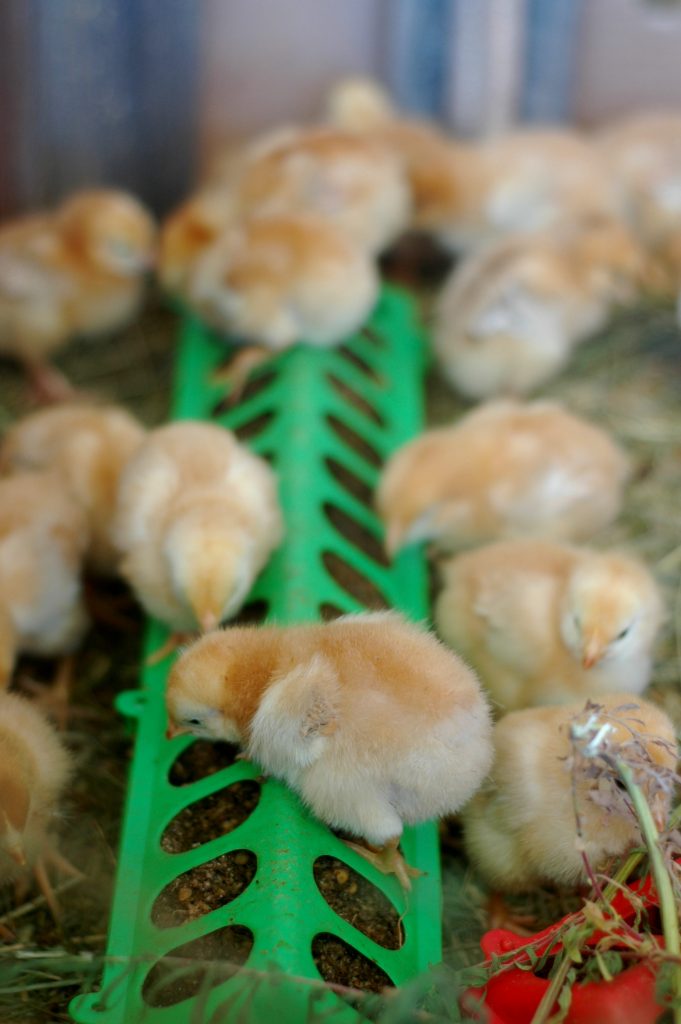 Deciding to feed Scratch ‘n Peck Soy-Free Grower Formula was not an easy decision for me. Anyone who raises their own broiler chickens knows that the end cost per chicken is already MUCH, MUCH higher than a chicken that you can purchase at the store. After all, Tyson has “perfected” the quick growing of broiler chickens – often making them available to us at less than $5 a bird. The downside to this growth is that the chickens are unhealthy – sick – never allowed access to fresh air and water – unable to walk and move about – and stuffed so full of genetically modified ingredients that their meat, no doubt, passes that nastiness onto the consumer.

You may not care about genetically modified foods. But I have a serious, serious problem with them. 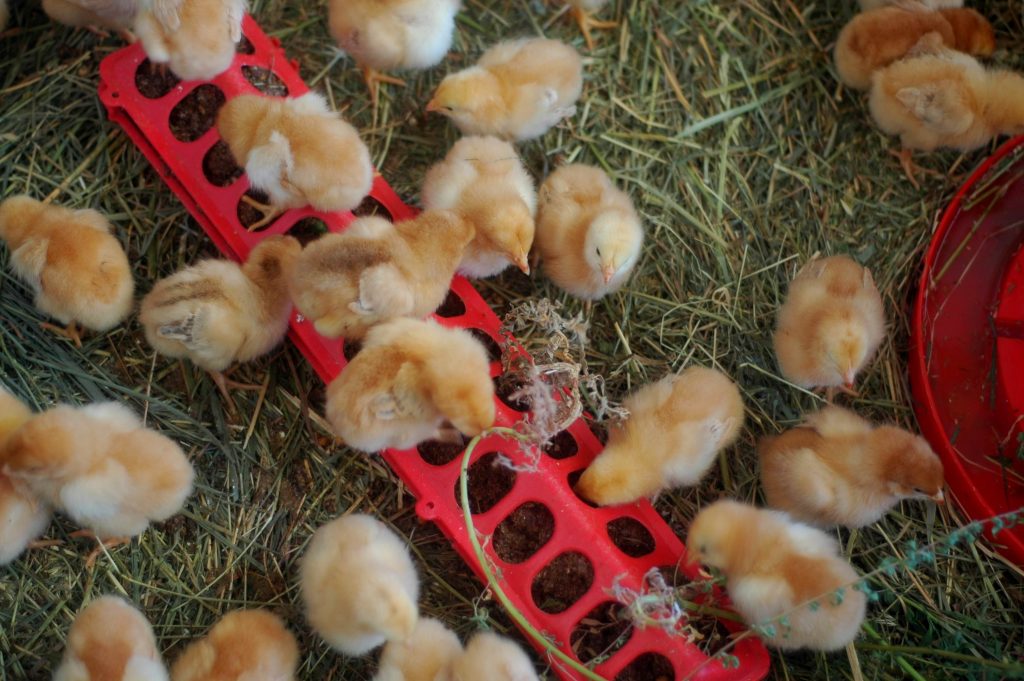 In choosing to not feed soy, along with desiring a non-GMO feed, we were left with one option. And an expensive one.

That being said, I could not have asked for a great option (even if it does cost me my first born child… sorry, Georgia). Scratch ‘n Peck is sourced from all local grains (to Washington, that is). It's organic. It's non-GMO. It's soy-free (camelina meal, fish meal, and peas provide the protein). It's whole grain. It's, as previously stated, the Mercedes of chicken feed.

Because we also opted for Rainbow Rangers instead of commercially-popular Cornish Cross, our chickens will not grow quite as quickly or quite as efficiently.

I know what you're thinking. But I never choose to do things the easy way, do I? If I did, I'd be living in town, eating Tyson chicken from Safeway, and buying all my produce from Walmart. But remember now, I'm not trying to do things the easy way – I'm trying to do them the best way I can. And while it may not make much sense to many to raise a $15 chicken, to me, it makes total sense. 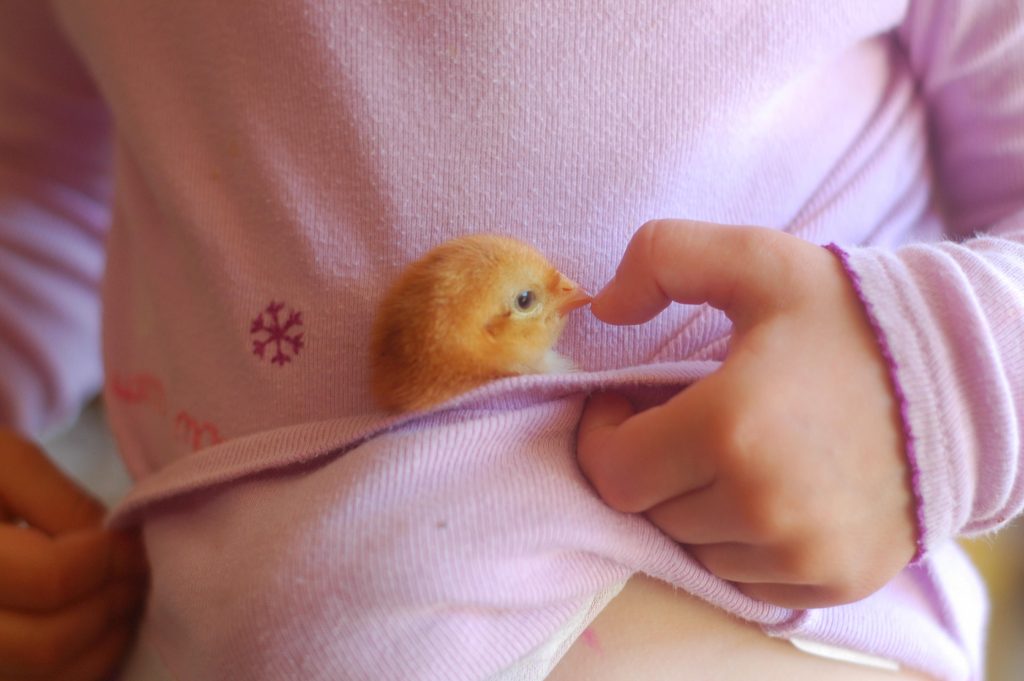 It's estimated that to reach butchering size of 4-6 pounds per bird they will need about 16 (ish) pounds of feed. This puts our feed costs alone at $11.20 per bird. Tag on the $2.50 that we paid for each chick and you're looking at $13.70 per bird. At that's if everything goes according to plan – which let's be honest here, never happens. 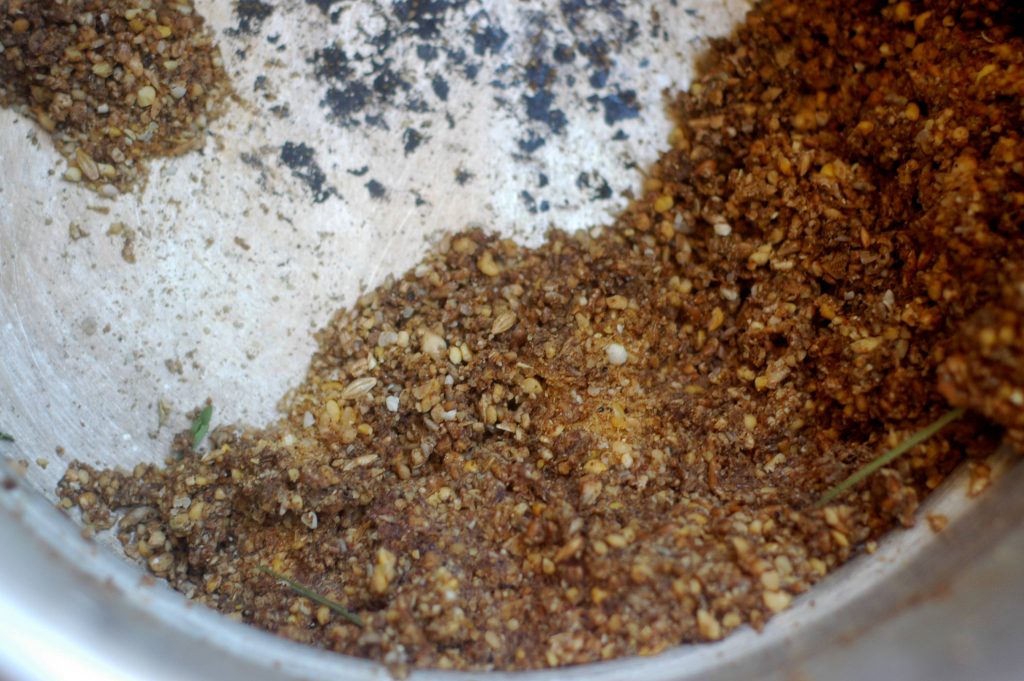 After researching a bit more about the aggressive eating nature of these meat birds, along with the fine particles sizes of our chick starter (also from Scratch ‘n Peck), I decided to soak the chicken feed in filtered water for 24 hours prior to feeding it to the chicks. This helps to create a porridge like consistency out of the feed, which I've already found has been super helpful in eliminating almost all waste. Because the feed sticks together slightly, it also ensures that the chicks get the protein rich fish meal and camelina meal instead of just picking out the bigger particles, like the corn and peas. Rumor has it that this can also aid in the digestibility of the feed (makes sense, no?) and can boost the efficiency of the feed-gain ratio. More efficient digestion = more weight gain for the same amount of ingested feed. That's what I like to call a free lunch. Sure, it takes a teeny bit more time and my hands are left smelling like a fish processing plant, but that's alright. I don't mind. 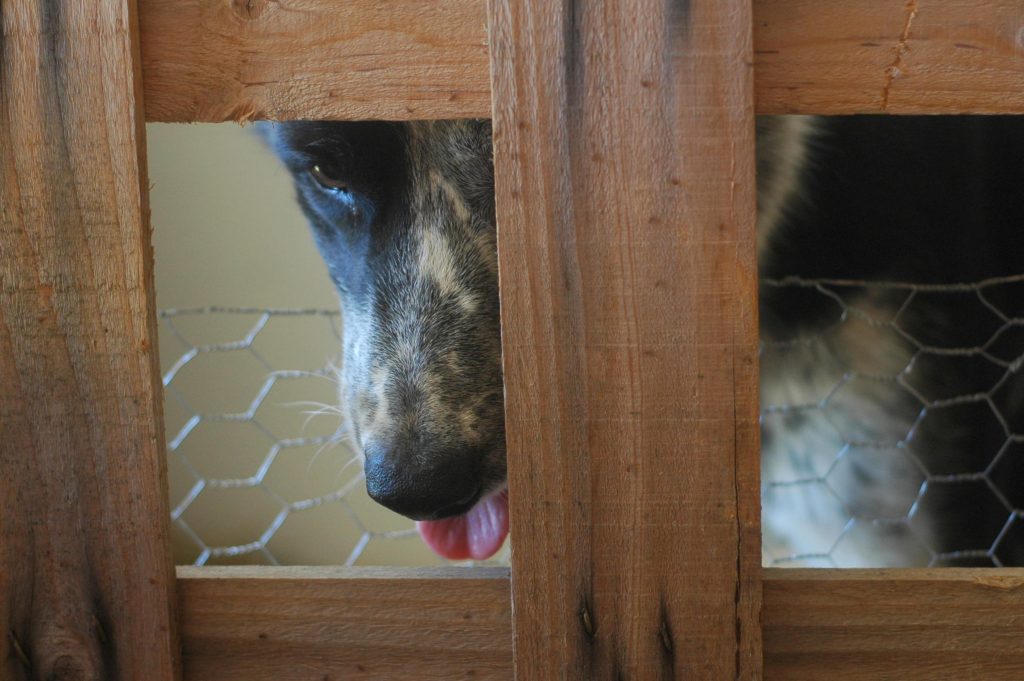 In one and a half short weeks, the chicks will be moved into our homemade chicken tractors. These will contain and protect them as we move them alongside our hillside. Each day, they'll get moved to a new little paddock of dirt, grass, and weeds. I'm just hoping the tractors are strong enough to keep raccoons, weasels, hawks, and owls at bay. I'm thankful we have Toby to keep watch over them – at least he may be a slight deterrent to any predators. I'm pretty sure we'll loose some, but we'll try and keep our losses to a minimum. Obviously. 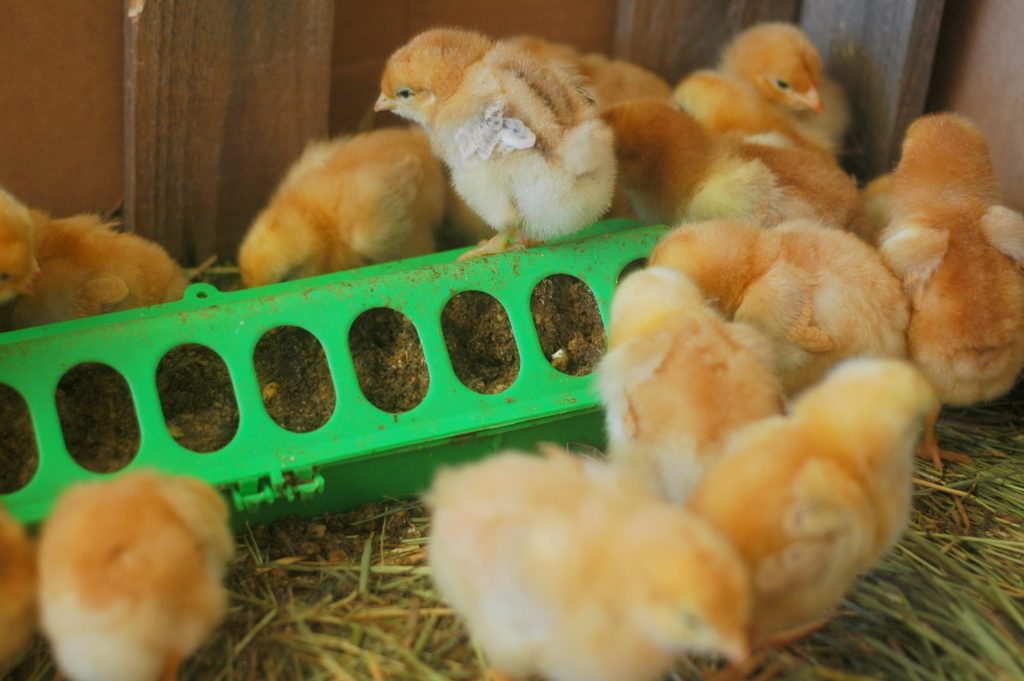 What else am I missing…

So many of you have expressed interested in raising your own meat birds, I'm really trying to document EVERYTHING for you as we go through this for the first time ourselves. I hope you'll find it helpful. The more chickens that are raised out of those God forsaken commercial chicken houses, the better. We should raise our chickens wisely and responsibly.

They are small creatures, yes. But they are a blessing – a rich and delicious blessing. 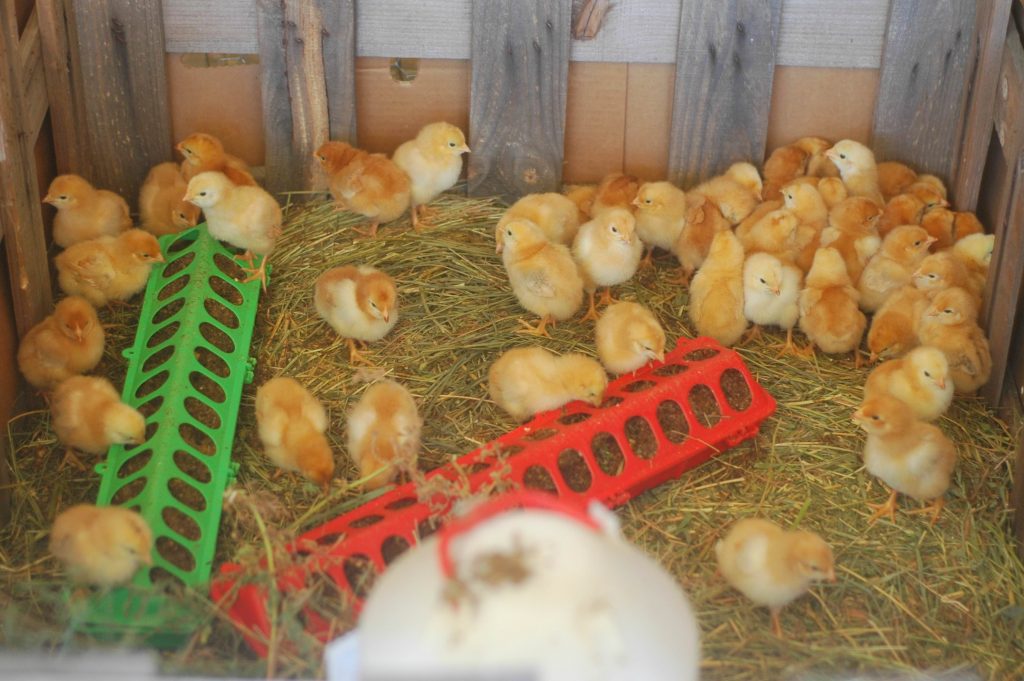 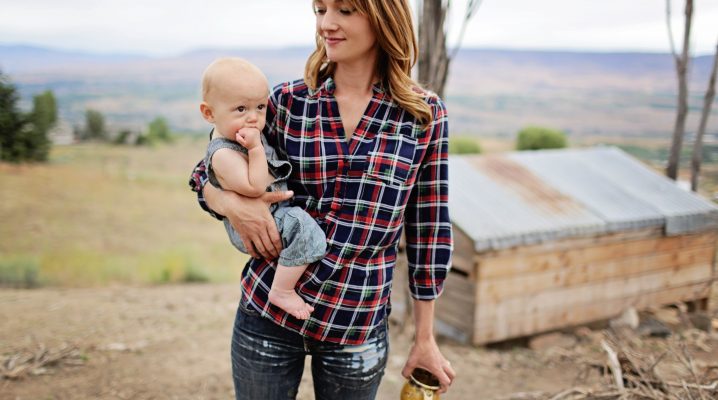 The one thing I did to be happier.

So here’s my story. About the one thing I did to be happier. Last week, as he normally does, Baby Will grabbed my iPhone and brought it over to me… 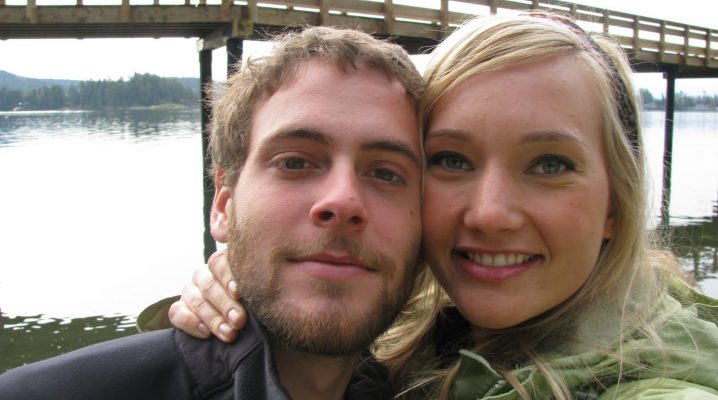 Part Deux: My testimony. The good, the bad, and the ugly.

If you missed Part One, read the post HERE before starting this one…or you’ll be sincerely confused.  I’m just sayin’… Okay…now where did we leave off… I hadn’t wanted to go…. 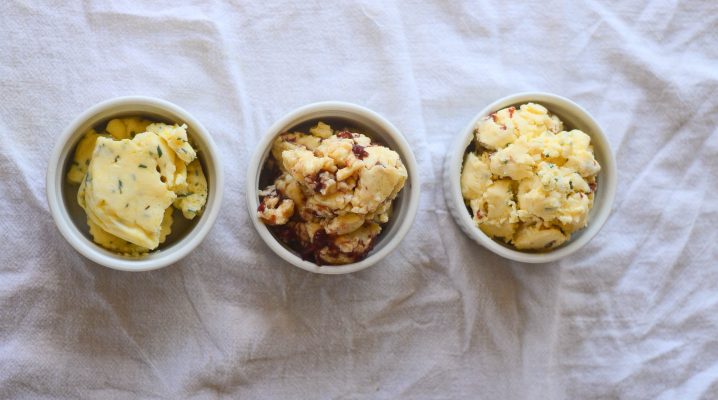 You thought it would stop at homemade butter. Or at the ‘How To Make Butter’ video. Or even the homemade clarified butter. But you were wrong. Because my love for…