I fear I'm writing this post as much for myself as for you. I've got to get seriously organized (like, in a bad way) before this weekend.

So glad you asked.

Because this weekend will mean the end of the road for our beloved Rainbow Rangers. And by “beloved” I mean our “tasty” broilers that we've been raising for the past ten weeks. 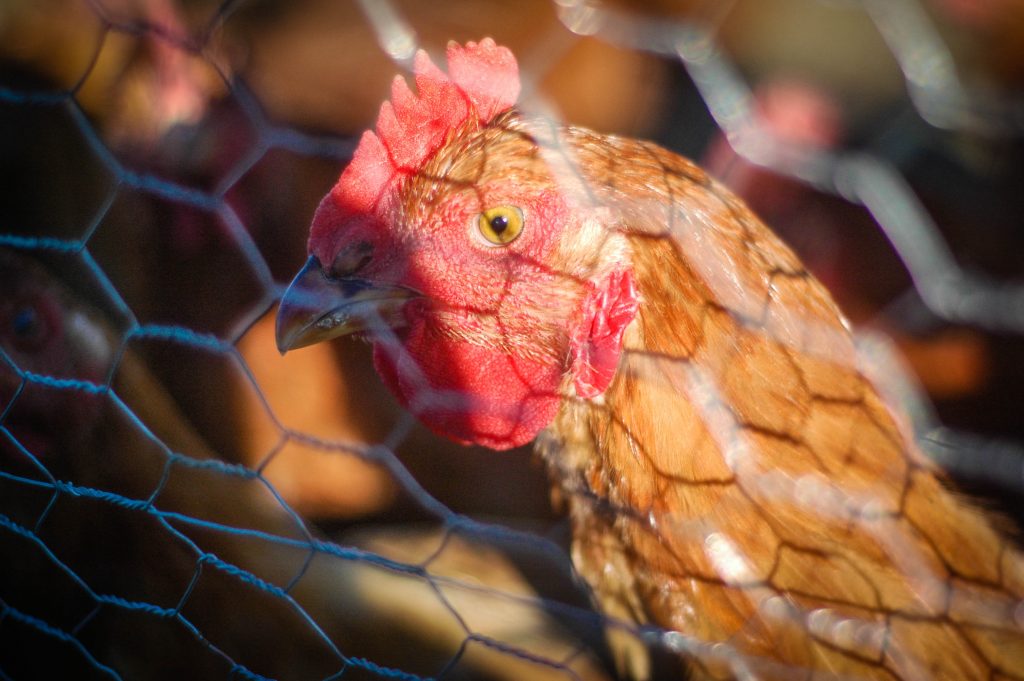 One of my favorite parts of raising these broilers thus far has been the knowledge that I've gained about them – as it goes with many projects on the farm, until you're in the thick of it, you can only “plan” and “learn” so much. Before these chickens arrived, I slaved over spreadsheets and calculations trying to come up with a homemade feed ration for them. I stressed about housing, chicken tractor designs, brooder ideas, and harvesting techniques. And here we are ten weeks later preparing for the very first butchering of chickens on Beatha Fonn.

Our first two were lost in a crazy thunderstorm that we had in September. Even though we sheltered them, the nature of chicks is to huddle together in cold or bad weather and this storm was RAGING. When I went out the next morning to check on the chicks, I'd found that two of them had been trampled to death by their roommates. Bummer. But at that stage, the chicks were still *fairly* young so there wasn't a huge investment into each bird quite yet.

Fast forward a few more weeks, and you'd encounter the chicken that was lost by beheading. Well. Sort of. When I'd gone out to feed, I'd lifted up the door to grab the waterer. While closing the door, it slipped from my hand, and all but decapitated one of the birds who'd stuck his neck out to grab a nibble of something-or-another. I'd have hoped that it would kill it instantly, but instead the poor chicken flapped around (realizing that it's neck was broken) and rolled a ways down the hill where it died a few seconds later. I was traumatized and cried and felt so terrible. But so as not to let his poor life be for nothing, we quickly cleaned and cooked him up in a stock for supper. All was not lost. 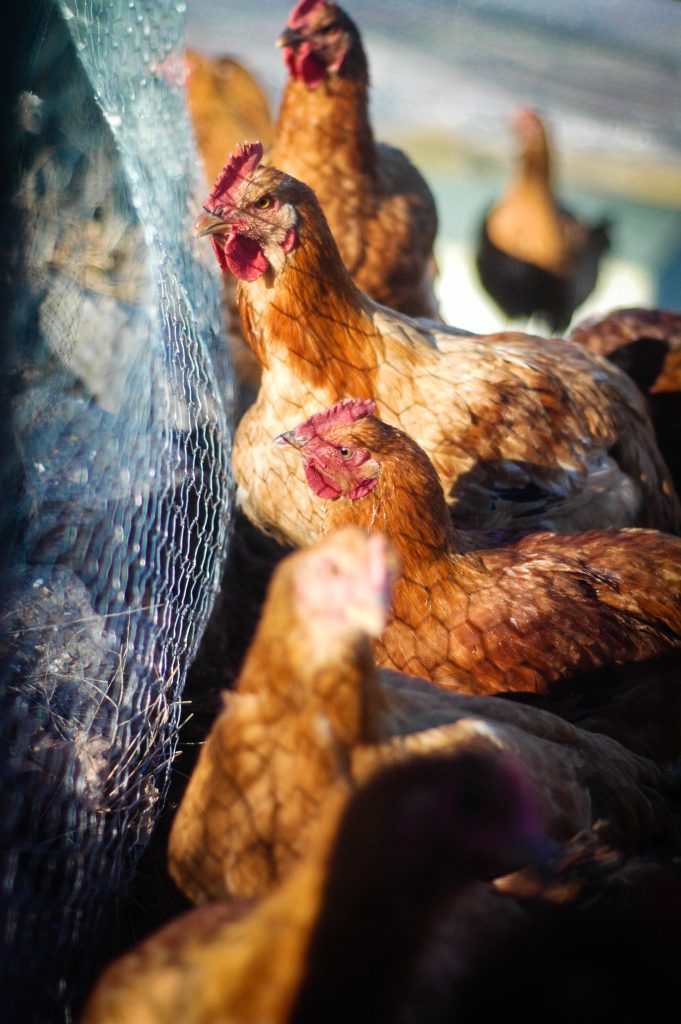 Fast forward a few more weeks and I found myself, once again, in quite the hairy situation. Once again, I'd gone down to feed, only to discover a GIANT owl trapped in the pen. Even though our pen is entirely enclosed in wire and netting, this wise ‘ol owl had found his way into the pen… yet apparently, was not able to find his way out. I was once again traumatized and spent the next half hour trying to figure out how to remove said owl from an entirely enclosed area. I ended up having to cut the zip ties holding on the netting and flapping back the net so that he could fly away – and seriously, this guy's wingspan was like fifty feet. He was giant and I was terrified. But it was also one of the coolest experiences of my life – getting to see such a phenomenal bird that close up! Sa-weeeeeeettt! I only wish I'd captured a better photograph (not that I would have been able to hold my hands steady enough … I was shakin' like a leaf!).

That is until the next morning post owl when two of the birds were found decapitated in the coop. Apparently, the owl came back for revenge. Dang you, owl.

Possibly 6 (we'll label the last one's death ‘mysterious circumstance' because I never found a body or sign of struggle). And I'll be danged if it isn't super difficult to count up 45 chickens that all look the exact same. I don't think we'll have a super accurate count until butcher day, though I'm sure that pesky ‘ol owl slipped away with one or two more.

In an effort to stay organized, I'd like to point out a few things:

1. Rainbow Rangers: An awesome breed. I've been very pleased with them. They've grown quickly, steadily, and health(ily?). We've had no leg issues or sickness. All of the chickens have lovely personalities, are kind to each other, and are a joy to have around. They are happy to scratch through grass (their pen, in the beginning, was full of it!) and forage for bugs. I would absolutely raise this breed again.

2. Scratch ‘n Peck: An expensive but wonderful product. We fed our chickens the starter formula (which includes corn) for the first two weeks, at which point they were switched to the grower mix (corn free). They've been thriving on it and I've been very pleased with the quality of the product. GMO-free, local sourced grains, soy-free, and (primarily) corn-free. Super expensive. But worth it. And by the way, we never really used a feeder after the chick stage. Instead, we just dumped it in their pen and let 'em scratch it up.

3. Fresh air, fresh water, grass, and bugs: A huge benefit to the life of a chicken. I'm thankful that our chicks have had access to all. I will be planting their pen in grass seed before winter so that next summer, when we start our second batch, we'll have a nice healthy chunk of pasture for them. I wish that I'd had more grass for them this year, but we live in a dessert of sorts. There ain't no grass unless you plant it and water it… just a bunch of sage brush…

4. Forget the chicken tractors: that is, unless you live on a perfectly flat and level piece of land. What a waste of time (and effort!) (and money!) these turned out to be. Our piece of land is very… rolly polly-esque… and moving those danged tractors around was a nightmare. Utilizing a large, permanent, fenced pen was totally the way to go. Next year, it'll be super easy to stick 'em right in. I love how this still gives them the freedom to scratch, run around, and forage in the sunshine – all the while, protecting them from predators.

5. Get more waterers: Good Lawd, these chickens drink a lot of water. I'm going to have to figure out a better system next year because filling up this 5 gallon waterer three times a day is just ridiculous. Ain't nobody got time for that. 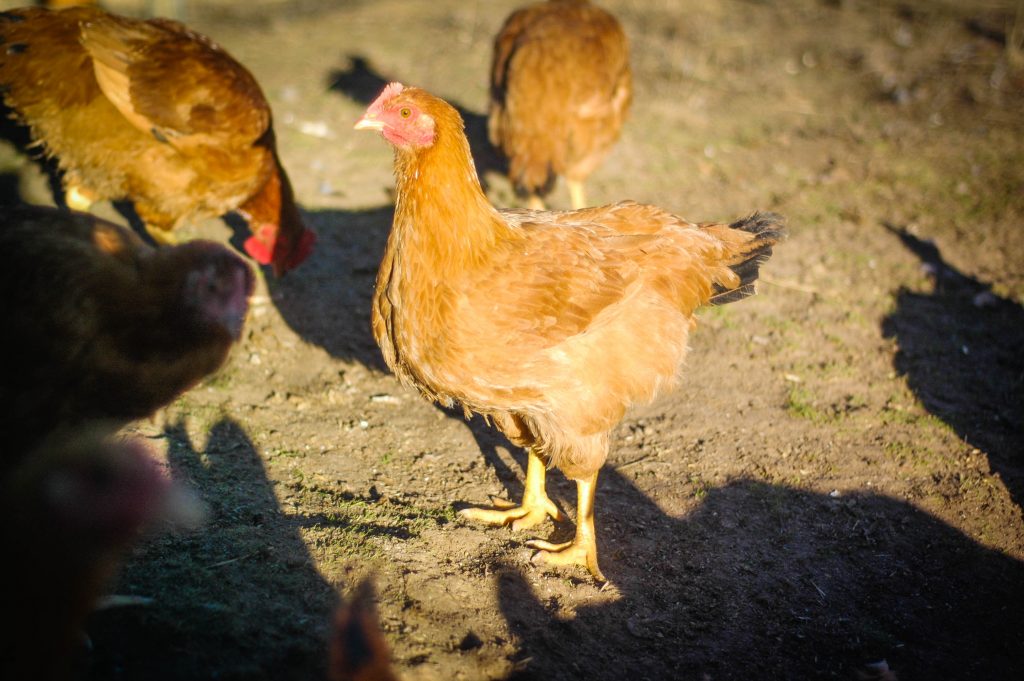 And now we come to the butchering part. Well, tomorrow, rather. I'm preparing for the ‘party' these next few days and here's what I've come up with thus far:

– Killing station: The birds will be placed upside down in our homemade kill cones (that are simply plastic gallon hugs with the tops cut off, nailed to a tree). This will keep them contained and calm. Their jugular veins will then be cut and they will bleed out in a matter of a minute or so. They will continue to hang in the kill cones, where the blood will be drained into garbage cans. There will be three cones and cans set up. This is ideal in that the bird's heart will do some of the work for us in pumping out all of the blood, which would otherwise become coagulated. We don't want that.
Equipment: Kill cones, trash cans, sharp knives, and a strong stomach (the blood drained into the cans will be composted).
Workers: My brother in law Brandon and Stuart will be working this station.

– Plucking station: The birds will be placed in a plucker that I am borrowing from a friend/reader (Hey Lindsey!). This…well… plucks out their feathers.
Equipment: Chicken plucker, garbage bags (for feathers… which will be composted).
Workers: Dad? Our friend Scott? Not sure.

– Cleaning station: The birds will be rinsed, weighed, have any remaining feathers removed, and placed loosely in plastic bags for air chilling. They will remain in the refrigerator for two days (which will help to relax the meat and improve the texture). They will then be shrink wrapped in these super-handy-bags I purchased and placed in the deep freeze.
Equipment: Sink and running water, small scale, tweezers (to remove stray feathers), and shrink wrap bags.
Workers: My Mom? My sister? Me? Ah, someone'll do it. 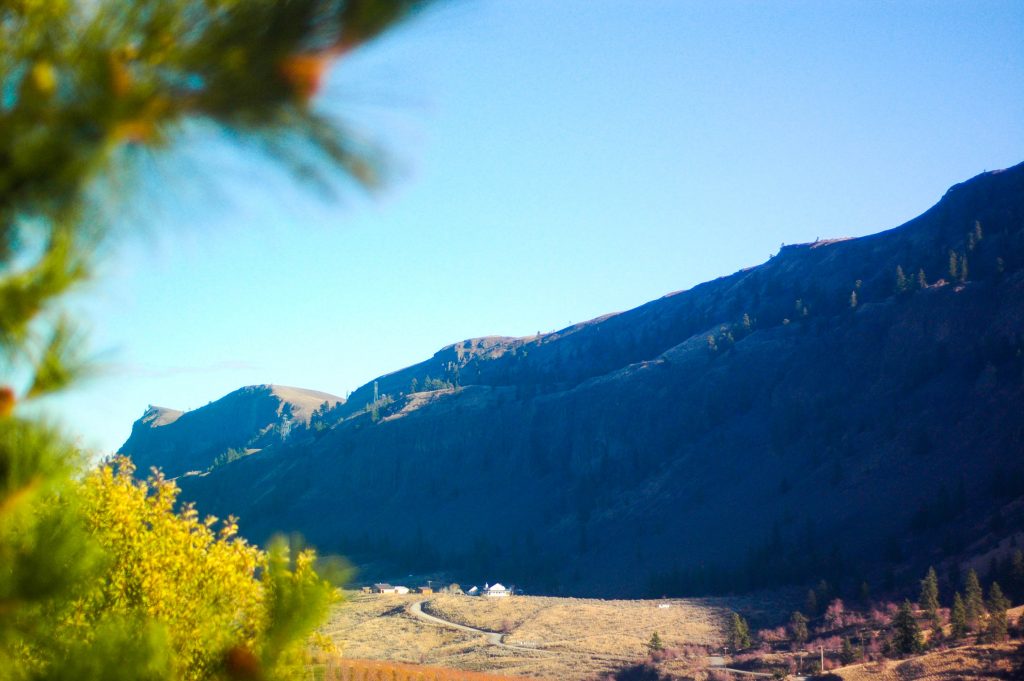 So that's it. It's on like Donkey Kong. Whatever that means…

It's not with a light heart that we go about butchering out meat chickens this weekend. Raising this meat from start to finish has been such a blessing in that we've been able to see and appreciate all that these chickens were created to do and be! We'll miss having them around but as a harsh winter approaches, it makes sense to get them into the freezer now. I'm sure that they could use a few more weeks to fatten, but so it goes.

We are thankful for the Lord's provision through these birds.

I'm looking forward to having our first taste of Beatha Fonn Pastured Poultry! And what sort of bird wouldn't be happy to have lived it's life with this view? 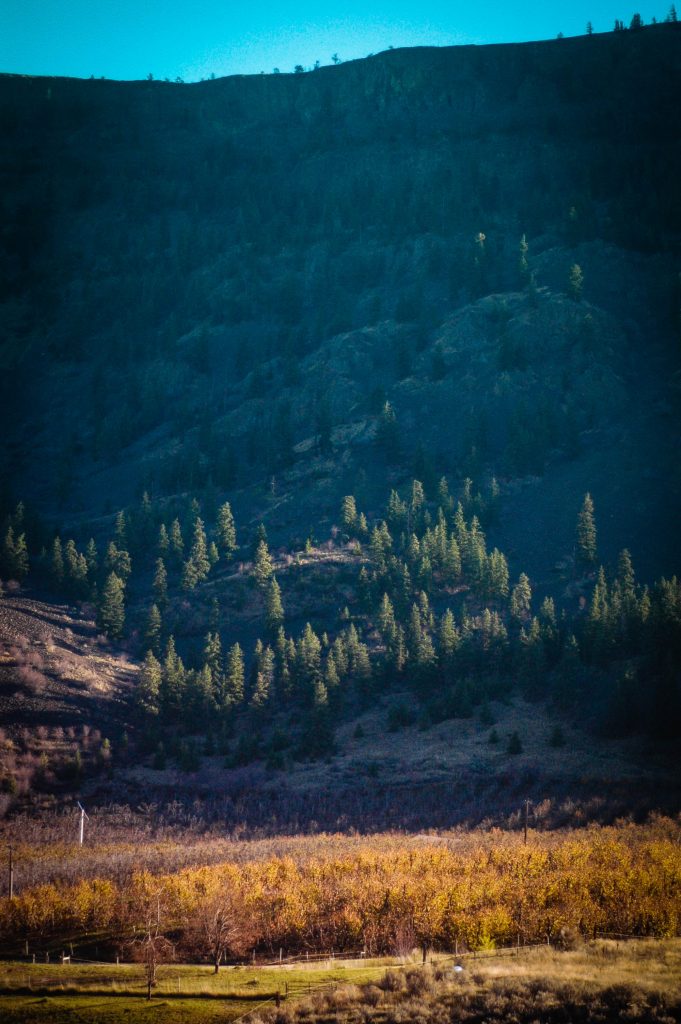 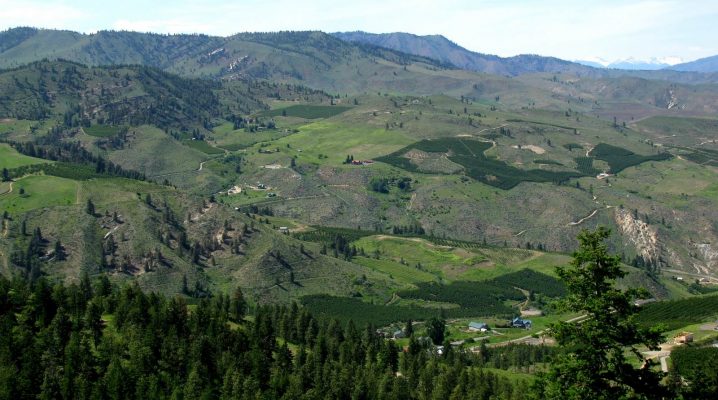 Guns on a homestead.

What’s better than a sunny, warm, lazy Sunday afternoon?   Nothing.  I’ll answer that question for you. To fully maximize the magnificence of this afternoon, we took a stroll with our friends Jason…

I must admit, ya’ll are very inspiring – what wonderful recipes, how-to’s, and gardening inspiration I’ve been enjoying from your link ups! Thank you all for being here. If this… 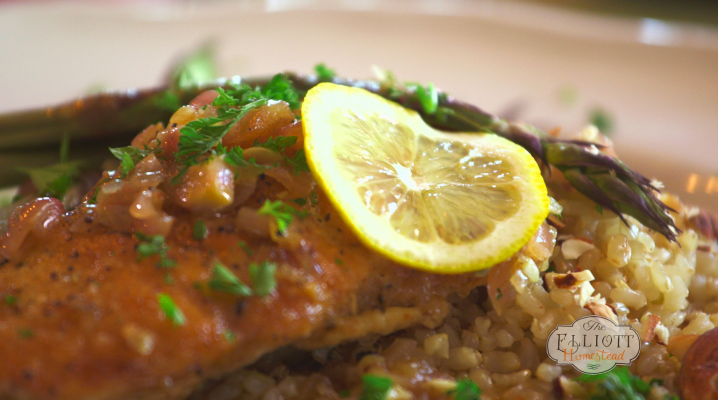 My family LOVES this Free Range Chicken Piccata recipe. Homegrown chicken is a go-to ingredient on our homestead and, of all the amazing ways to prepare it, this mouthwatering dish…