How on God's green earth have I not told you about Hermoine, Ginny, and Harry yet?

(Yes. Those are Harry Potter names. Let's get over it and move on… because some of us here love H.P.)

They've been with us for the better part of a month now and after trying to source heritage pigs for months and months and months… and months… I must admit, I feel quite relieved that they're here now – tucked into the old rabbit run not 10 feet from my bedroom window.

(I say “tucked” like it's all planned out and sweet, when in reality, they're shaped like torpedoes and drastically dashed any hopes I had of keeping them in electric fencing for now…) 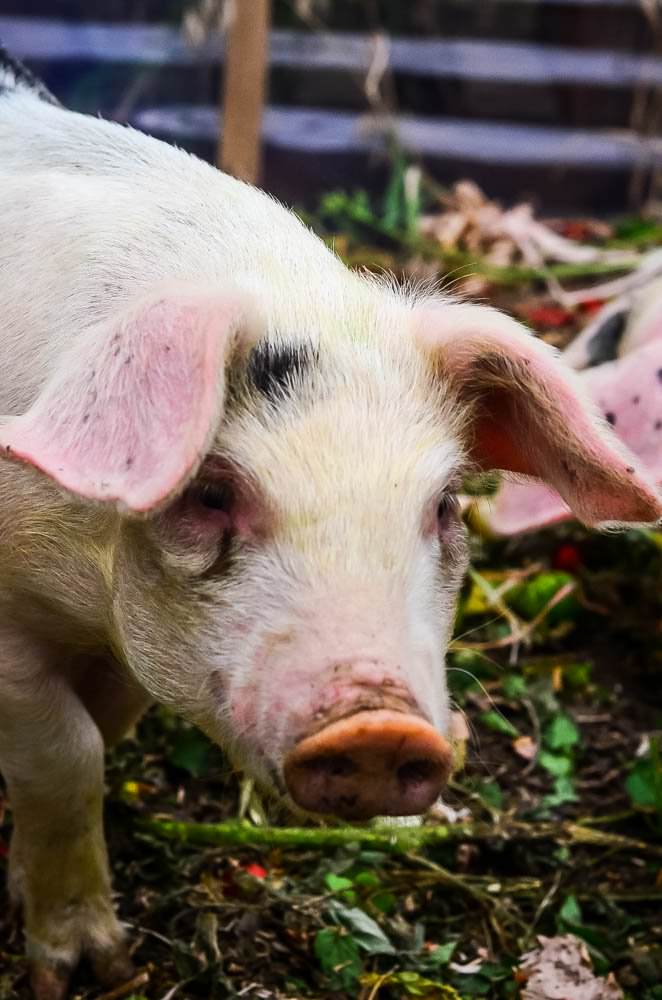 Ya. I'm talking about you Harry.

And don't worry about them being that close to my bedroom window, either. They actually smell good. And believe it or not, pigs are pretty clean! Unlike every other animal on the farm, pigs actually poop and urinate in a designated “poop corner” which makes cleanup and rebedding a delight!

Okay, maybe “delight” was not the right word to use there. But tolerable, no doubt. And frankly, I spend so much time dealing with fecal matter, really – what's three more pigs?

Seriously, ya'll. So. Much. Time. Hey Shaye! Whatcha doing? Whatcha been up to today? Oh nothing! Just chillin'. And dealing with fecal matter of all sorts. You?

Why are we talking about fecal matter again? Back to the important matter at hand…

WE FINALLY HAVE HERITAGE PIGS! And I am just tickled pink. With spots! 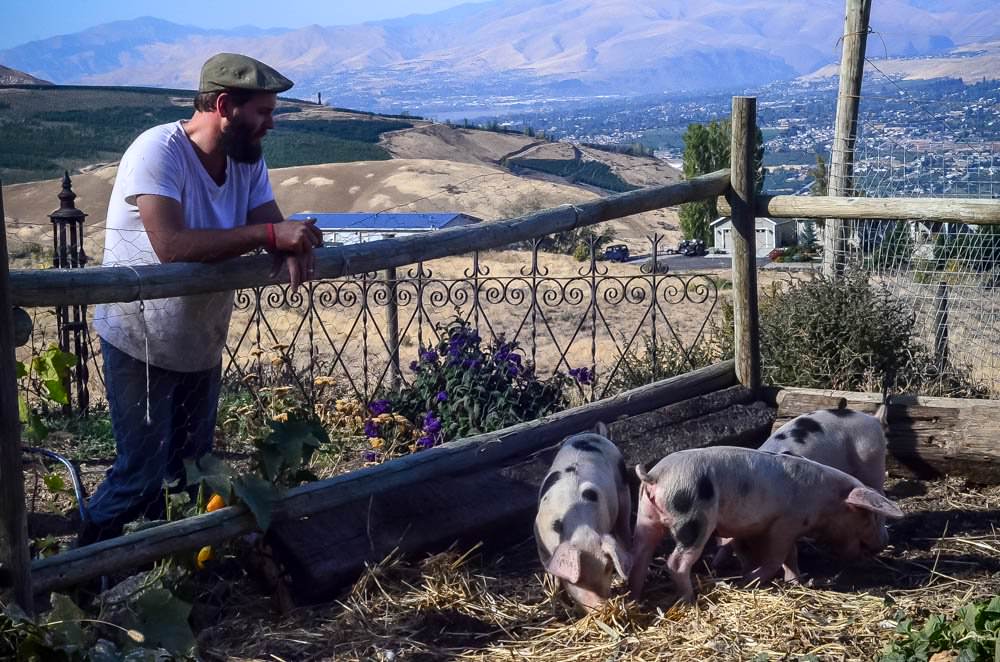 After the better part of six months was spent trying to find a breeding pair of Large Blacks anywhere remotely close to our side of the country, only to have our hopes dashed after the pregnant sow we did find had an entire litter that was stillborn, I finally had to accept that Large Blacks weren't going to happen. At least for the time. I spoke with a few pig-experts and finally settled on a different breed that shared many of the same traits as a Large Black pig – Gloucestershire Old Spots.

It's an old English breed that is most known for it's white skin, black spots, floppy ears, calm demeanor, great maternal instincts, and grazing abilities. And lucky for me, my friend Rachael happens to raise them. And not only does she raise them, but she does a fine job doing so. I've “imported” a few of Rachael's animals to our farm over the years – most notably the three foundational members of our sheep herd. As luck would have it, I reached out to Rachael at the same moment her pig was farrowing. She was able to raise and choose some fine breeding stock for us – two gilts and one boar.

The boar is Harry, obviously. And Ginny and Hermoine are the little gilts. A gilt being a female pig before she's had her first litter, naturally. Like a heifer in cow terms. You with me?! 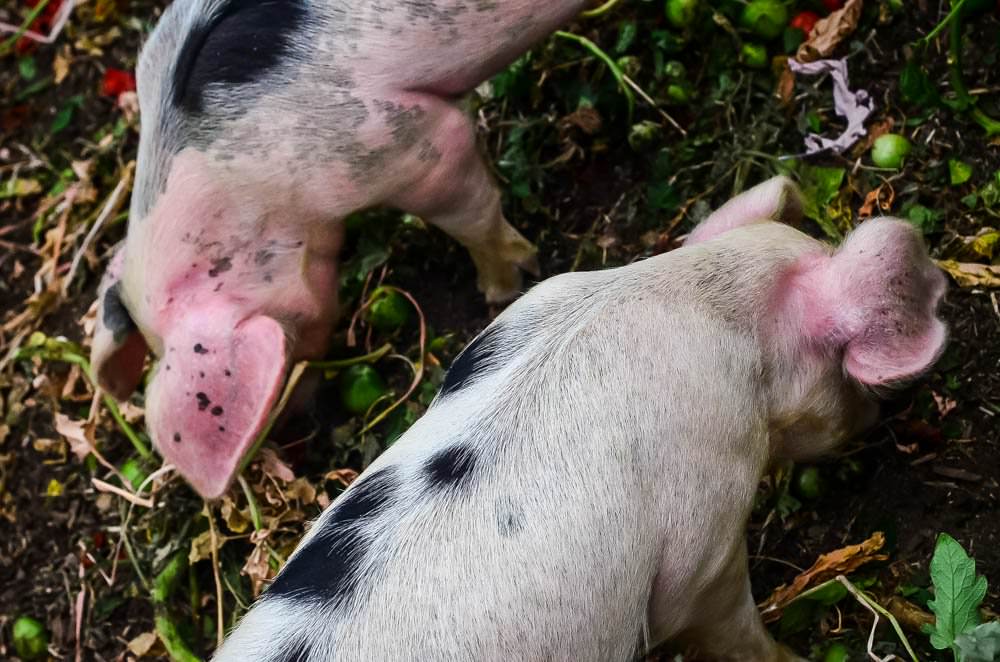 Just a few days back, while rewatching Victorian Farm for the seventeenth time, I finally made the connection that they were raising Old Spots on their farm in Victorian Britain! “Princess” was their sow and was as sweet as pie – not to mention a great mother. After the cray-cray Duroc X's we've been raising, that sounded like a step in the right direction. Yes, they grow fast…. but they have miserable temperaments and personalities. We won't let the kids near them. I've learned in my few years of having pigs that breed plays a significant influence in all aspects of the pig. Imagine!

If a pig is bred for meat production alone, it comes at the cost of other traits: such as maternal instincts, grazing ability, demeanor, etc. You can't have it all to the max. One needs to find a balanced pig that can fulfill all roles faithfully. Commercial production doesn't allow for such, which is why you're left with meat monsters.

Our hope has always been to bring heritage pigs to the farm. For starters, they're a great resource to have to clean up the slew of extras we find ourselves with: food waste, garden waste, tree trimmings, whey, etc. Having a pig around is like having a garbage disposal that magically grows you bacon. Yes, please! 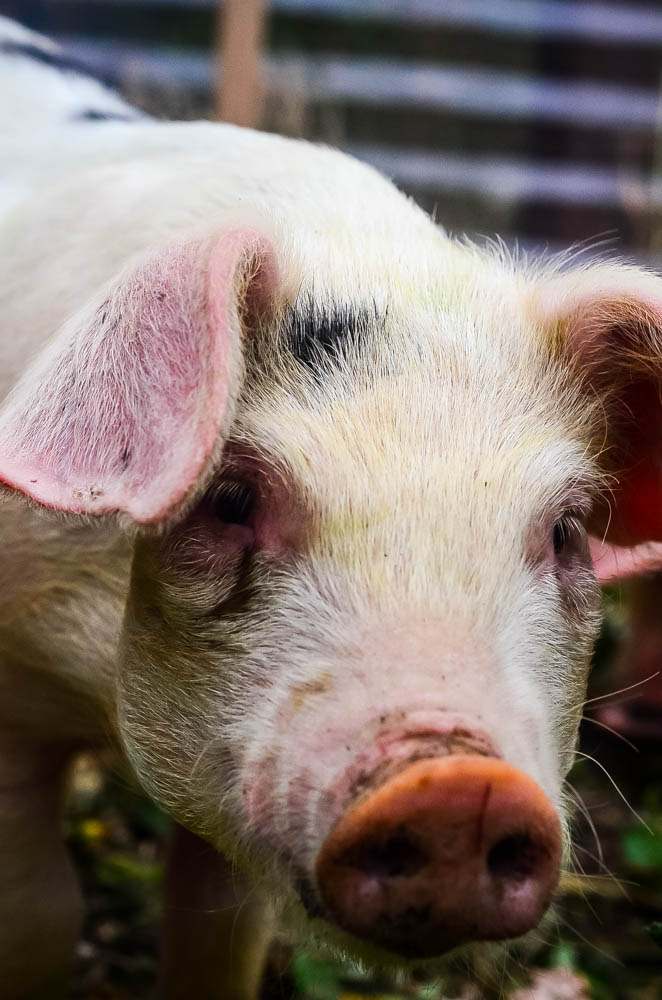 Oh. And did I mention more bacon? More proscuitto? More pancetta? More pork belly? More chorizo? More honey ham? More barbecues where I invite all my readers to drive to the farm, bring a side dish, and tuck into some slow roasted pork?

You'll often find in homesteading it takes experience to decide on what works well and what doesn't work well for your land, your schedule, and your desires. I love that we get the chance to try these pigs on our farm and get to know them.

Will we love them? We already do.

Will we hate them? Yes. We've already had those moments. Most notable when they busted a giant hole in the side of my greenhouse…

I don't know much about breeding pigs. But I'll figure it out. I didn't know how to milk a cow either when I sat down to do that the first time! And I got kicked. And I cried. And then I figured it out.

We're in the process of designing and building a proper pen for them that will sit alongside our meat chicken run. They'll have room to run and roam but will be kept close enough that I can mingle with them each day. I'm trying to convince them to love me, you see.

They are so sweet and friendly already – like little torpedo-shaped, spotted puppy dogs.

And that's an animal I can get excited about! 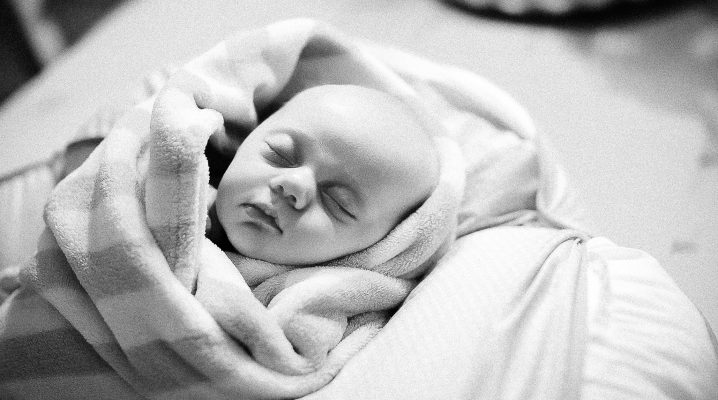 Life Snippets Daily snippets of life in our homesteading madness. Welcome to the party, rockstars. If you like it, Share it! 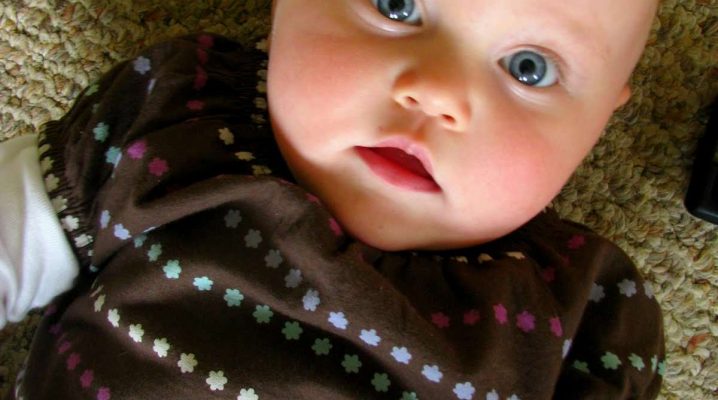 Okay, people. I already know that I’m going to make some of you mad with this post.  However, I still must stick my neck out there in the name of…journalism…blogging…and… 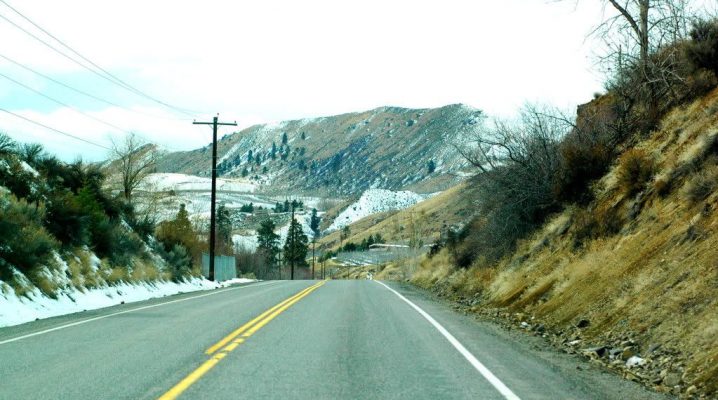