Once upon a time there was a farm girl. She loved cows. Their smell. Their fuzzy necks. Their wet, black noses. Their ability to provide her family with gallons and gallons of delicious, raw milk. And the love story goes on and on. Insert the family cow.

By the way, that farm girl is me. I love cows. Hence the reason we just arrived back from a solid two-days of driving to pick up an extra special heifer from a friend of mine. 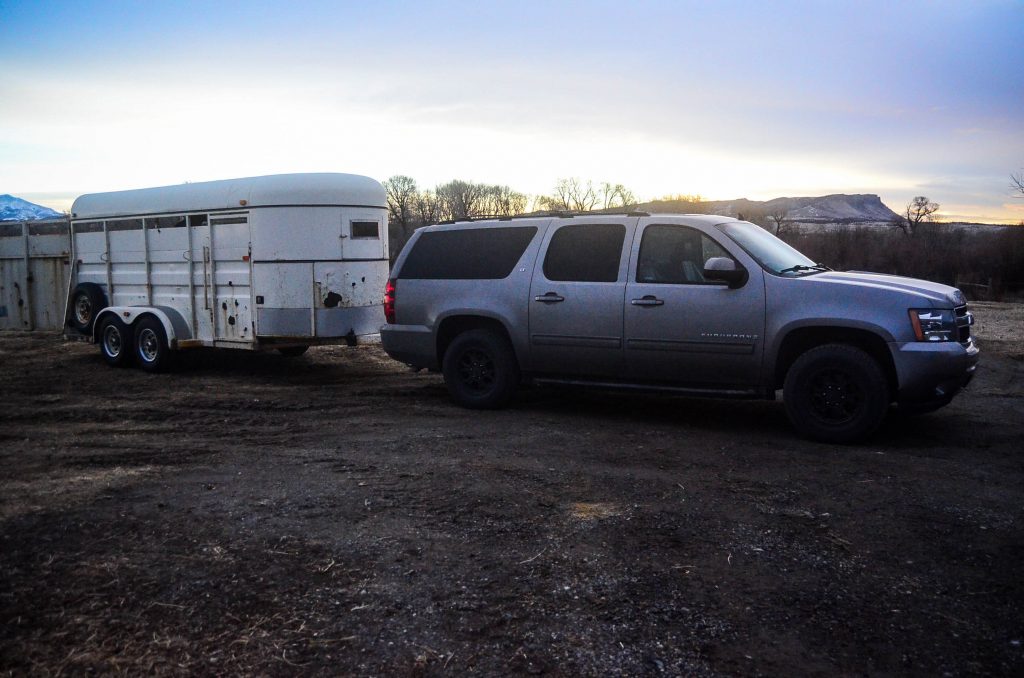 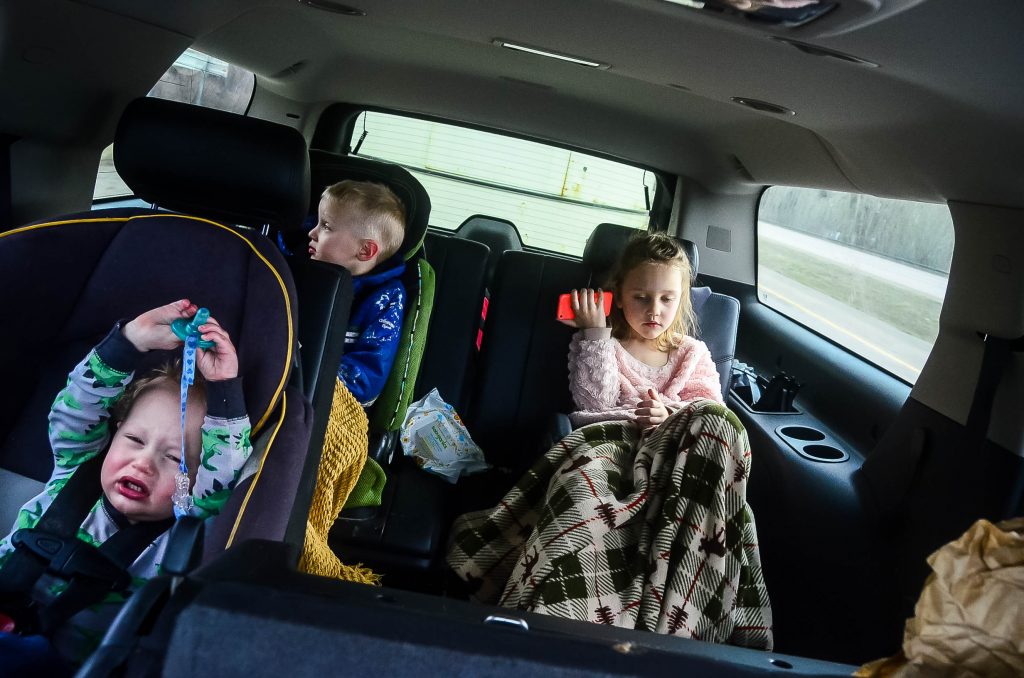 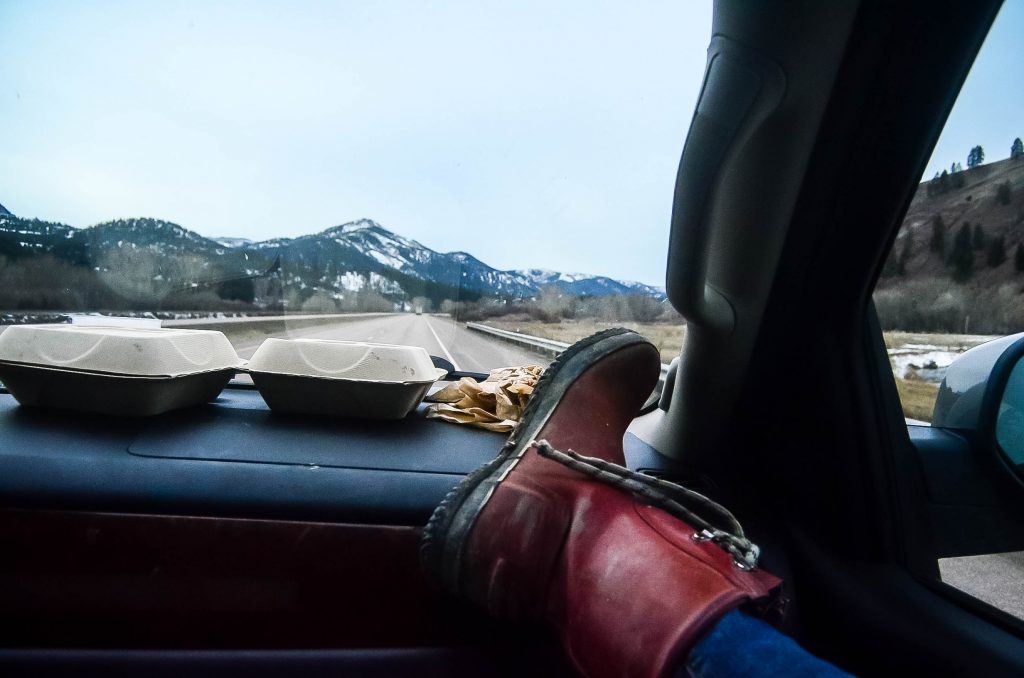 It wasn’t an easy decision for me to get another cow after we lost Sal this past summer. In fact, to be completely honest, I was thankful to not be hovered over a milk bucket at 5:00 am, dry heaving. I found out I was pregnant the same week that we lost Sal and as badly as I wanted to rashly go out and find the nearest cow I could on Craigslist that was in milk, my much wiser half advised against it. Honey. You’re pregnant. Take a rest.

And he was right. There. I said it. (Ah, who am I kidding, Stuart is always right…).

Providentially, we have enjoyed a rest from daily milking while I grow our fourth child. And as horrible as it was to lose Sal, I’m also thankful for the timing of it all. The farm move this winter has been horrendous, and to think we’d have been milking on top of that is almost unbearable. Even this homesteader has her limits, y’all.

We’re now only 8ish weeks away from meeting the newest Elliott. And finally, yes finally!, the last load has been brought from the old farm to the new farm. Life, slowly but surely, is settling in.

It was time to crown a new queen of the farm. 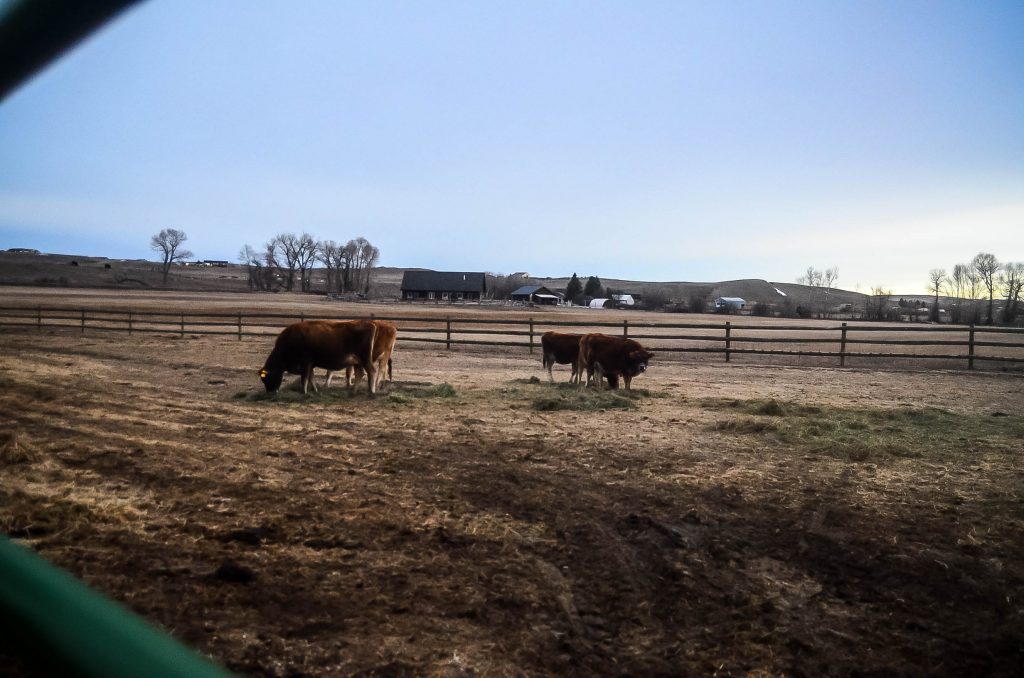 I’ve been desperately missing the companionship that comes from a dairy cow. And I knew that this time, I’d want to do it a bit differently. When we purchased Sal a few years ago, we showed up at our house a few hours before she needed to have her afternoon milking. Not exactly a recipe for success, especially since neither of us had ever milked a cow before. Ahem. There was blood and sweat dripping after that milking session – but don’t worry, it was all mine.

This time, we wanted to move a bit slower and spend some time bonding and developing a relationship with our new cow before we’d be saddled up under her furry flank squeezing that delicious nectar into the pail.

We wanted her to know us. We wanted to know her. And we also wanted the experience of teaching a heifer how to be milked. Maybe we’re gluttons for punishment? But so it goes. That was our choice. 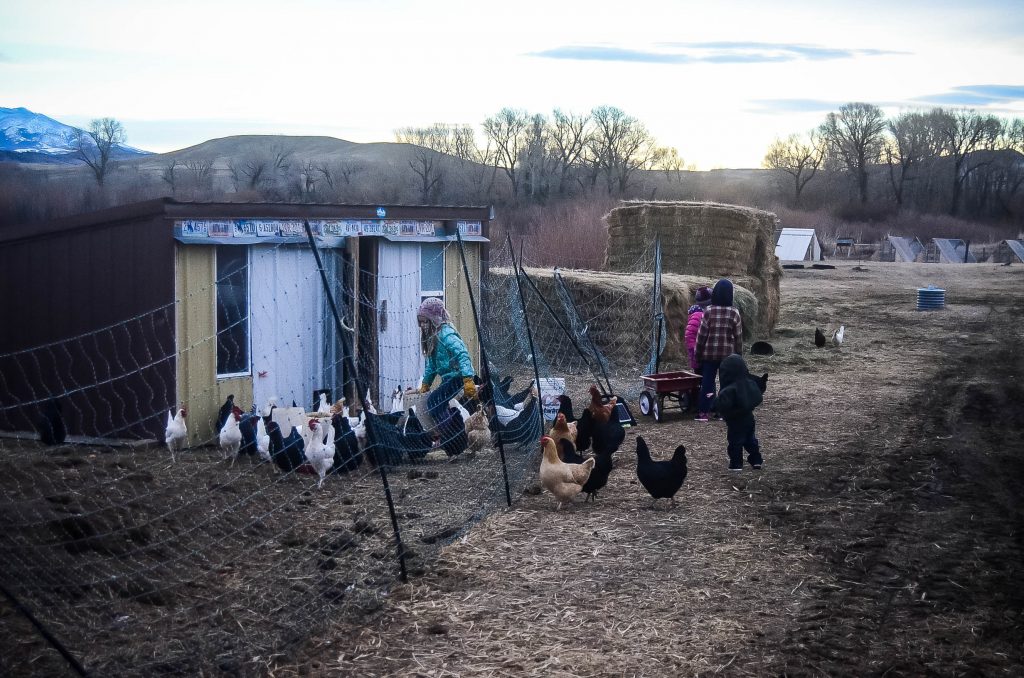 I’ve always had my homesteading eye on my friend Ashley’s Jersey girls who make their home at Red Fox Farm in Livingston, Montana. Ashley has been my mentor for all things cow since Kula (remember Kula?) and I completely trust her cow skillz and judgement. The poor girl has received more photographs of my cow’s girly parts and ligaments than I’m sure she cares to. So when Sal died, she was one of the very first to reach out and offer her advice, encouragement, and condolences.

A few weeks later, we approached Ashley about a new heifer. (Heifer is the term for a young, female cow that has not had a calf yet, by the way). She had the perfect one in mind for us – a new little calf named Cecelia who was born in July to a wonderful cow of theirs. She wouldn’t be ready for us to pick up for quite awhile, as she’d nurse from her Mama for many months. I was still deep in mourning for Sal, so I was just fine with that.

Knowing Cecelia was there… and that she’d be ours when the time was right… brought me a spark of joy. It gave me something to work towards, to save up for, and to look forward to. Though the farm hasn’t been bovine free since Sal’s passing, knowing Lyle was destined for the freezer has made our relationship with him slightly different than the relationship that comes with a dairy cow. You know. Because we’re going to eat him.

Cecelia, I’m not going to eat you. Hence the relationship difference.

And so the love story goes, when Cecelia was weaned and ready for us to pick her up, we loaded 3 hoodrats into the Suburban, borrowed a trailer from our friend Joel, and hit the road Jack.

By the way, while in the car, I started singing “Hit the road, Jack!” and then Owen started to weep and scream and tell me that his name wasn’t Jack, it was Owen, and that song hurt his feelings. So that’s something.

10 hours, multiple potty stops, a few espressos, and lots of whining later, we found ourselves at Ashley’s doorstep. Tired. Road weary. Wanting to sell our children to the highest bidder. 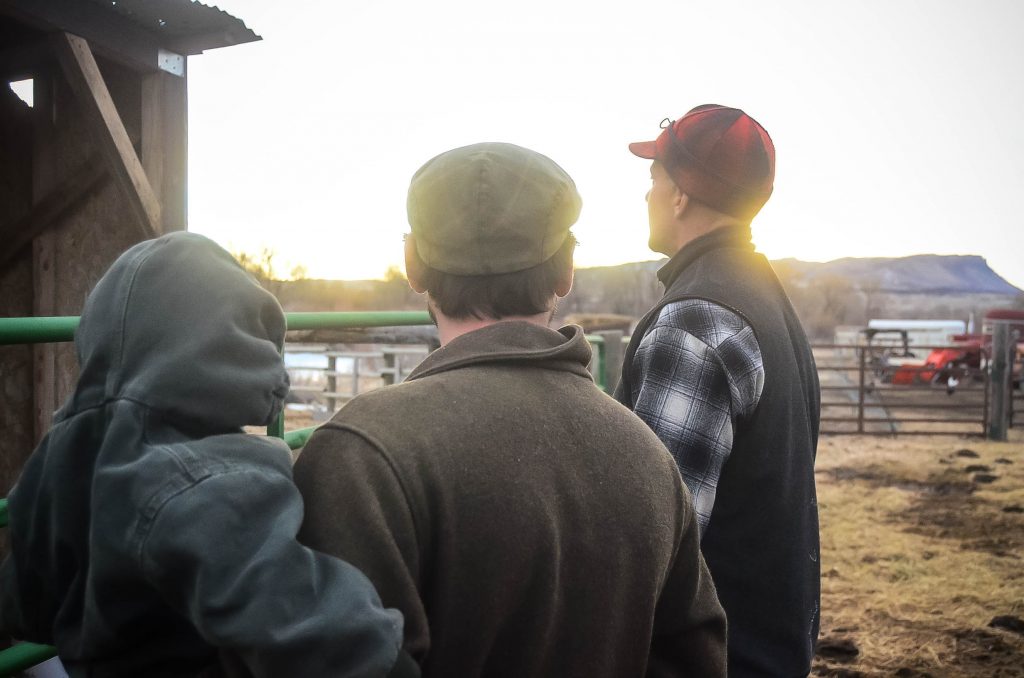 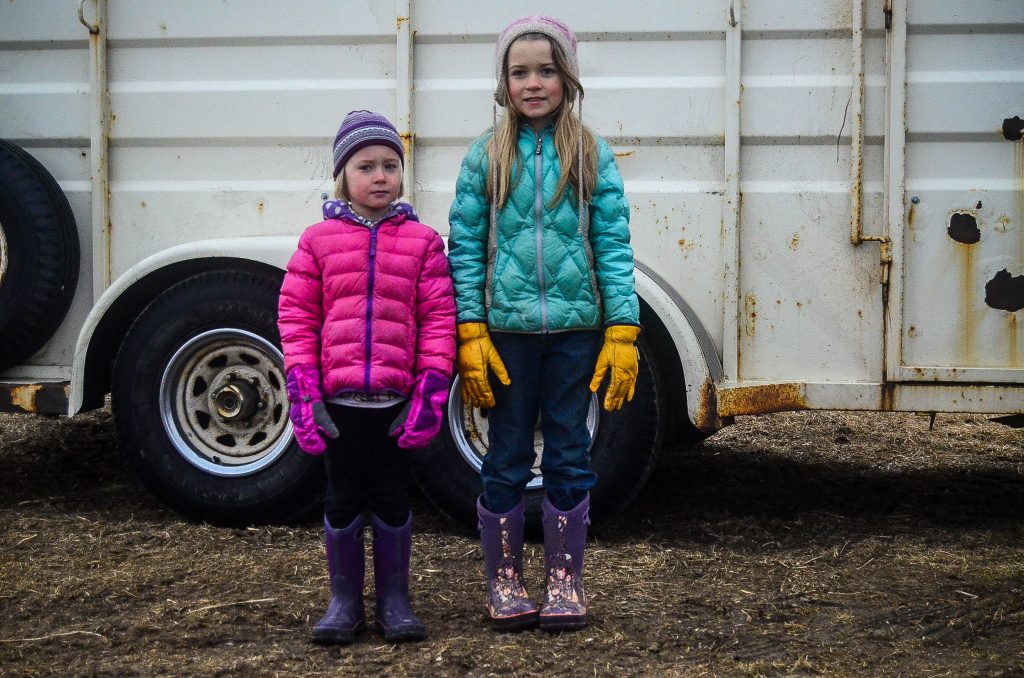 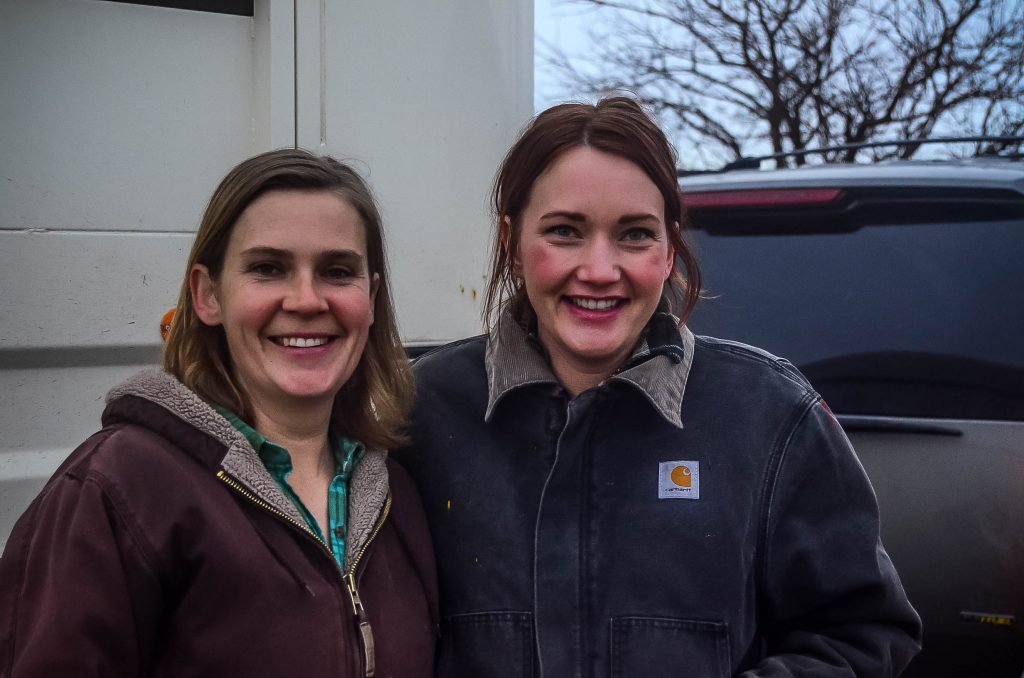 But her and Shannon lovingly opened their doors, fed us a fantastic pork chili verde, handed Stuart a local Montana beer, and let us sit around their table asking them questions about cows, farming, marketing pastured meats, and their milking procedures. Also, let’s not forget the fact that our children were able to run off with their children and play, play, PLAY! Win. 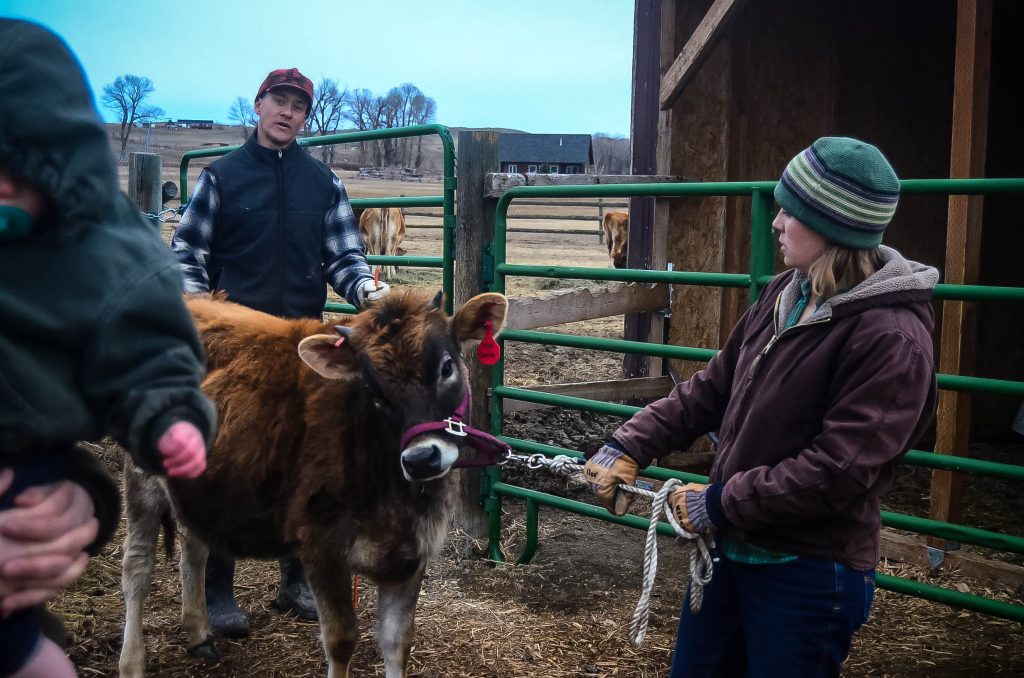 Less than 12 hours later, we were back on the road with Cecelia in tow. We’ve yet to establish a relationship with her – and since she’s at that quirky, spunky adolescent stage, I’m expecting it to take some time.

Love me, Cecelia! Love me! You're our new family cow! Is it bad that I want to bring her inside and make her my house pet? I could totally do that. The kids would love it.

We won’t plan on breeding Cecelia until Fall. This means she’d have her first calf the following Summer, at about 24 months of age. This means we’re looking at another year+ of no milking, but for now, that’s okay. After all, newest baby Elliott will require plenty of milking from me during that time.

… and ya know, there are still a few acres of pastures to build, a milking parlor to put up, and the like. Small details. 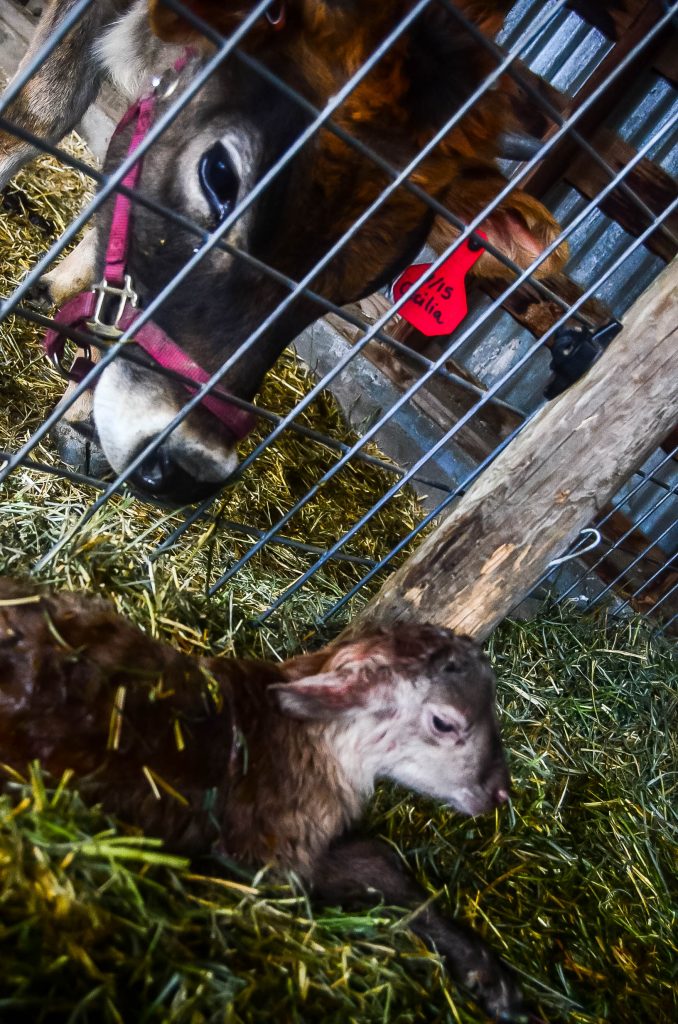 Side note: The relationship is already beneficial! Poo collection has begun for the new garden and compost pile. Ain’t no poo like a cow’s poo, baby. And you can quote me on that.

Welcome to The Elliott Homestead, Cece! You have no idea the circus you just arrived at… 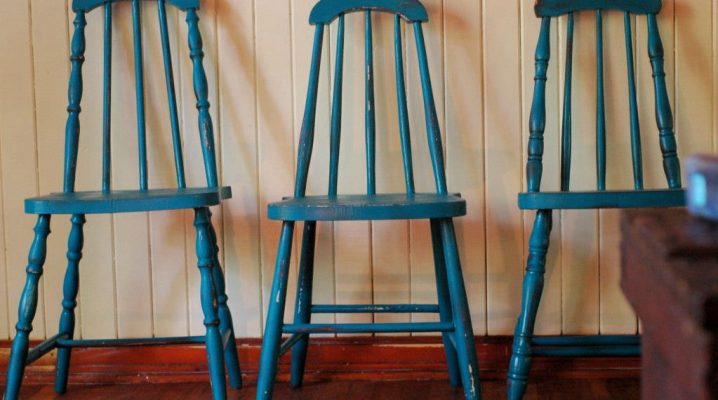 Seven of the eight chairs.

There is a reason parents don’t do certain things when they have children. Because it’s impossible, that’s why. And if it’s not actually impossible, by the end of the project,… 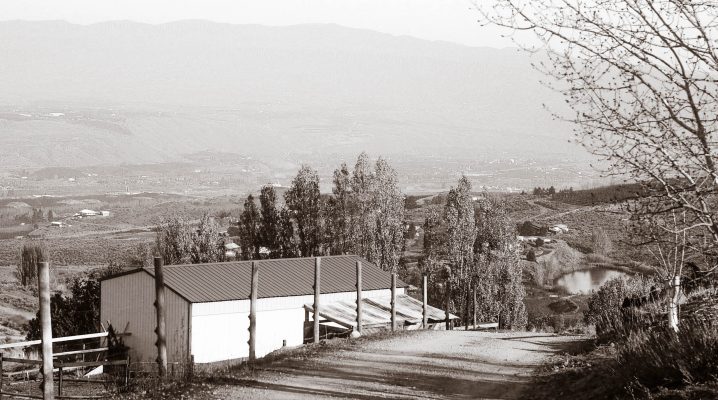 There’s poop on my porch.

There’s poop on my porch. One of my chickens ate eight eggs yesterday. My new katahdin sheep escaped their pen and ran through the electric fence into another pasture. My… 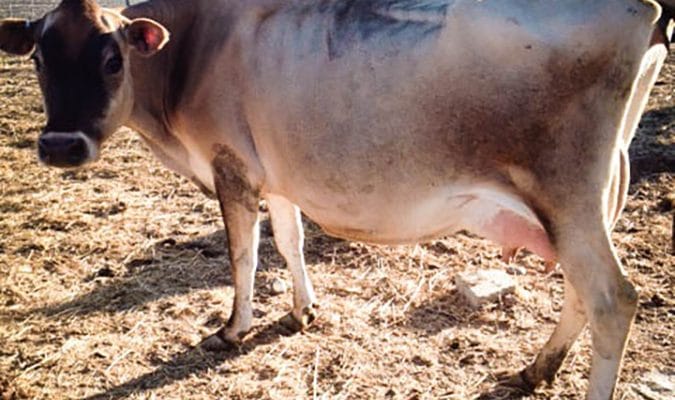 One of my favorite ways to spend any scraps of free time that I have is watching River Cottage on YouTube. While it feels like a vacation to me to…