I have had so much fun with our rabbits, it's ridiculous.

It's ridiculous that an adult human being, capable of designing rocket ships (okay, well not me, but human beings in general) can be this thoroughly entertained by a fluffy six pound creature with a tail.

I often find myself meandering out to their cages, just to look at them. And feed them little bits of clover I pick from the yard on the way.

It's a good thing I don't “pay” myself as I calculate the financial end of having the rabbits, because the time invested with them would really add up! Of course, this is from my personal choice. They could really care less if I came to look at them. In fact, all they really require is five minutes of feeding time in the morning. But still, venturing out to visit them allows for a little sweet break in my day. A time to reground. Refocus. And reenergize my homesteading efforts. 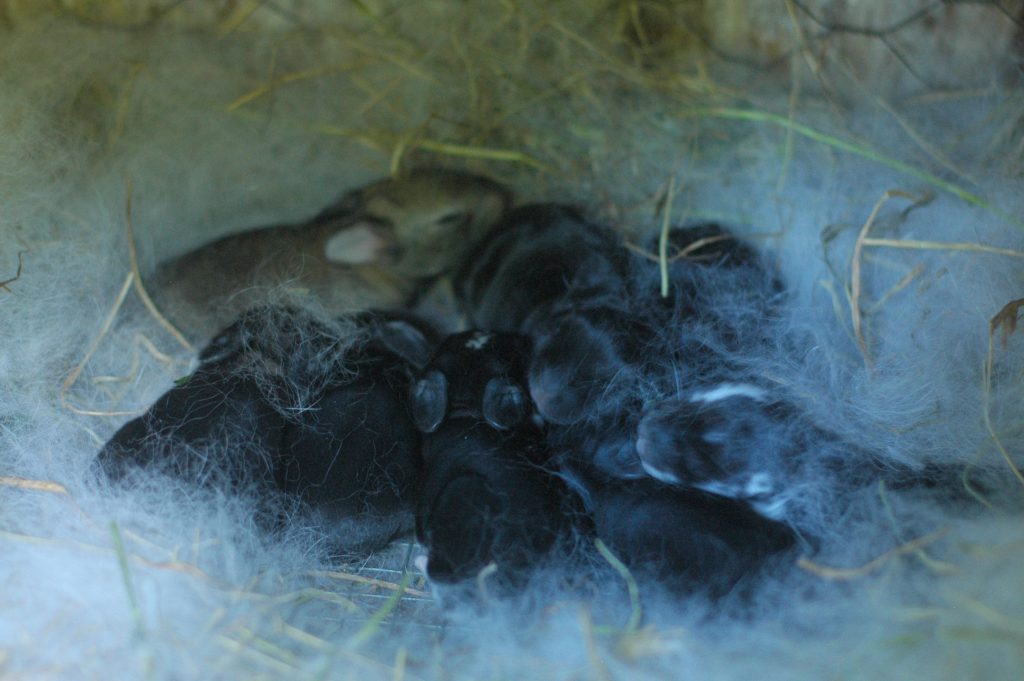 Last weekend, one of our does gave birth to eight (YES! EIGHT!) new little kits. And considering the fact that our last doe only gave birth to five (two of which survived), this was a real encouragement for us! Less than two months ago, we started with five rabbits – four does, one buck. We now have fifteen.

Because. Well, you know what they say about rabbits.

We have a closed-breeding-system, meaning we regulate when the rabbits breed. A colony-style-system simply houses all the rabbits together and allows them to breed at will. This might be an alternative looking into at some point, but for now, the managed breeding system is much more feasible for us.

I thought I'd share how we've set up the breeding system, as of now. Mind you, we're still very new to this, but “in theory” it's working quite well! And it helps us to keep being overrun by rabbits.

1. To start, we breed a doe. We do this by putting the doe into our buck's (aka: Scooter) cage. Does can be territorial of their cages and may not allow the buck to mount, so to keep it easy on everyone, we take the girl to the boy's cage. We let him get his groove on three times, to ensure she is bred. This takes all of three minutes. Seriously.

2. 30-31 days later, the doe will “kit” or have her babies (let's refer to these as Litter #1). She is kept in a cage that has a nesting box for this purpose where she can have them in private and keep them safe from the weather and predators.

3. As soon as the doe gives birth, we breed another doe. Like, the same day. Let's refer to these as Litter #2.

4. Litter #1 will nurse their mother for six weeks before they are weaned.

5. After weaning, Litter #1 will be moved to a new pen together where they will continue to grow until they are 8-10 weeks old. Basically, this means we only have to feed them for an additional 2-4 weeks after weaning. So, let's say, at 8 weeks Litter #1 is ready to butcher. Litter #2 will now 4 weeks. Litter #3 will now be born. And a fourth doe will have been bred.

6. Two weeks later, Litter #2 will be weaned and moved to a new pen. And two weeks after that, they will be ready to butcher (they are now eight weeks old).

Basically, the system is set up so that we have a litter of rabbits to butcher each month. Every four weeks, we will have a litter that is ready for harvest.

We could make it more often than that – as we have four does.

We also could make it less frequent than that – by delaying breeding a doe after a litter is born. 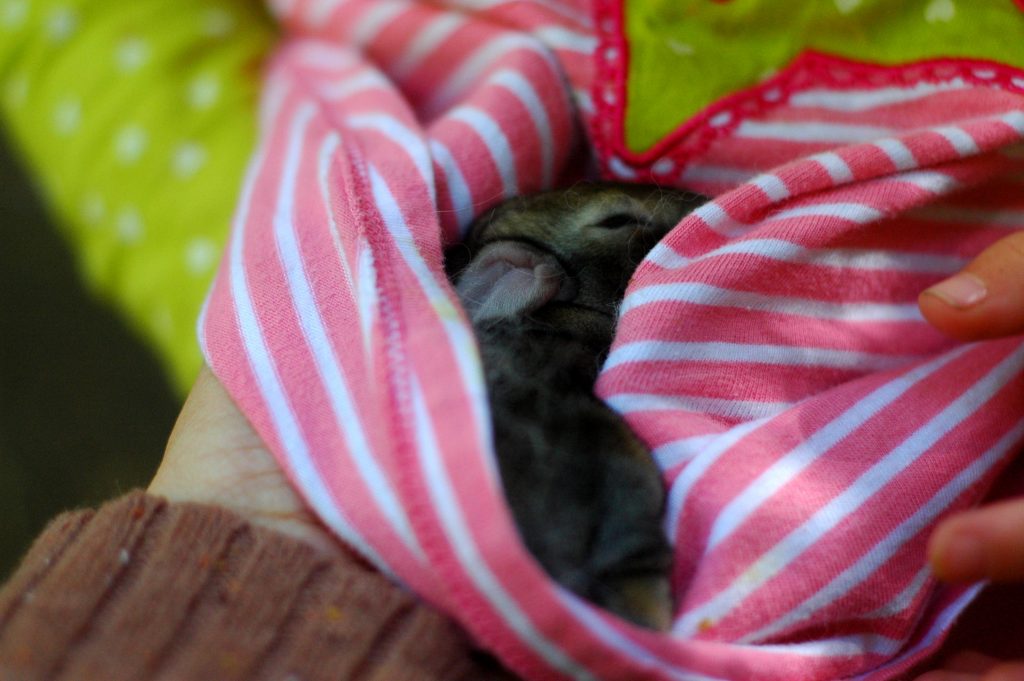 But for us, as of now, it's a good set up. We will only have to butcher once per month, which helps to save time. The downside is that if a doe only has a litter of two then we will only have two rabbits to eat during the month. But, alternatively, if she has a litter of eight (yay!) than we will have eight rabbits to eat during the month! The extra from one month can be frozen and held for months with smaller harvests.

Our first litter is currently five weeks old. Only three weeks until we harvest our first two rabbits! And as the system goes, the second litter of eight (currently one week old), will be ready four weeks after that.

I realize this is a lot of talk about week counting and the rabbit-mamba. But it's all part of homesteading! Establishing an effective breeding schedule is crucial to meat production – especially since we're doing it to help supply our family with meat and save money!

You may want to check out this wonderful resource that speaks further to the idea of breeding schedules, specifically for small-scale, backyard meat production. 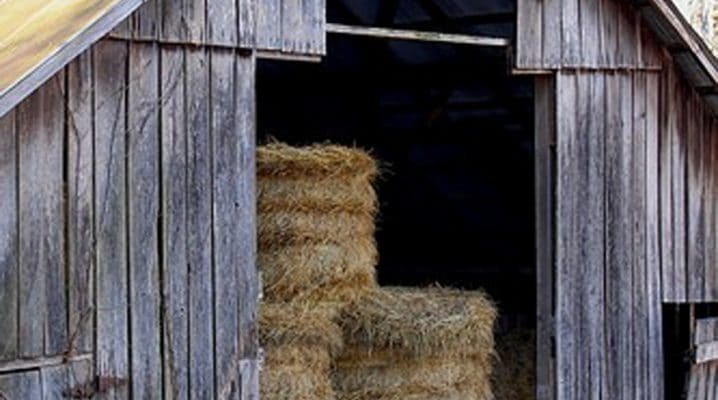 As I sit here and nibble the chocolate chips out of my homemade banana ice cream, I can’t help but think about all the wonderful things in the world. It…

How To Make Beeswax Candles

I did it. I got sucked into computer-land for too long. And when that happens, I peel myself away – brain slightly sizzled – and instantly try and find something… 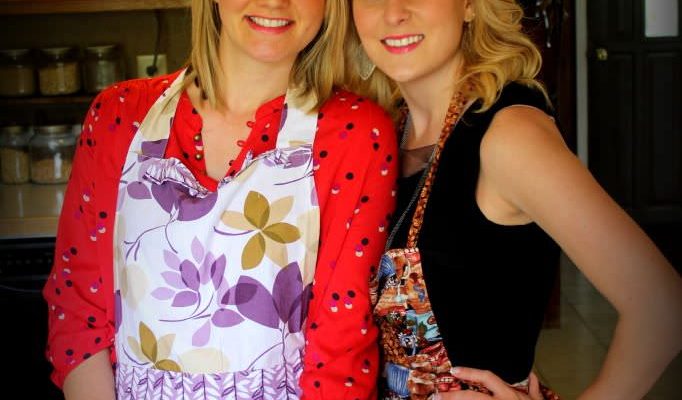 Alright.  I’ve been thinking about it for awhile now. You know, that trend. The trend that’s been hitting homesteading blogs like thunderstorms have been hitting Alabama. I’m talking about the…