Alright. I know you want to throw tomatoes at me. Here I had you all worked up for Sally's calf to come, you were there with me on Facebook (virtually) at the edge of your seat, only to check back and find no calf came.

No status update with a zillion of these (!!!!!!!!!). No photographs of a cow's backside. No video with squishy mucous noises.

Even though we had been on calf watch for days (her due date was June 6th), we inevitably found ourselves staring at the backend of a cow that wasn't doing more than nibbling weeds and occasionally laying down to rest. 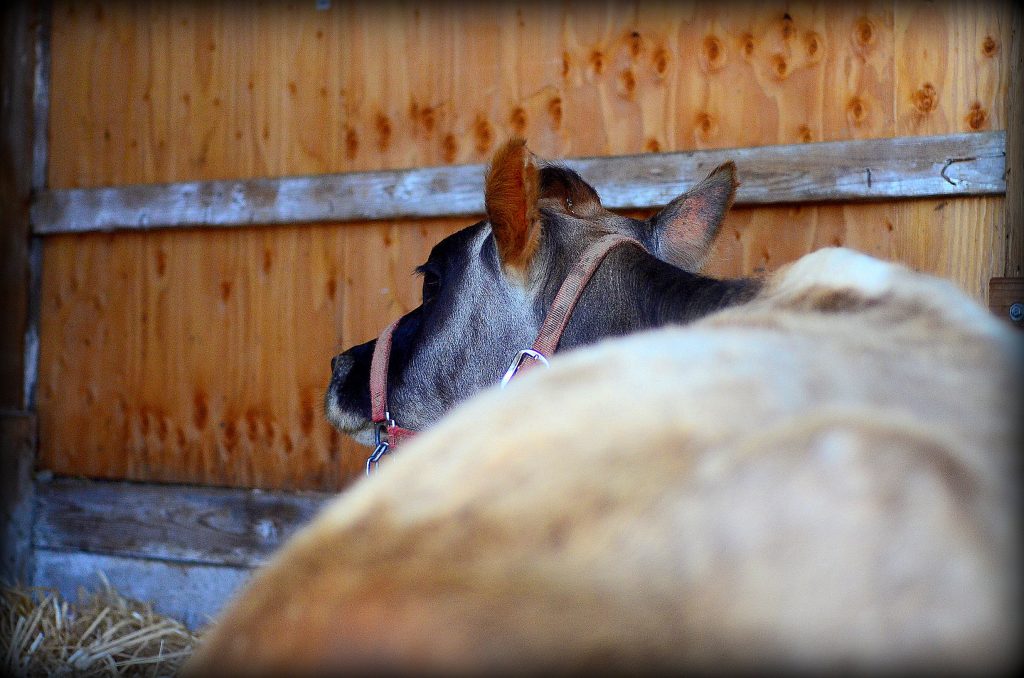 Come on Sal! Give me something! Give me anything!

Nothing, y'all. A big fat NOTHING.

I'd been going back and forth with my Calving Mentors, sending them photographs of udders, vulvas, and mucous drips for days. Were her ligaments gone? Uhh… maybe? Did her udder look full? Umm… sure, ya! How about her vulva? Does it look swollen? The girl is 1000 pounds, it always looks swollen… it's huge!

I sat in Sally's stall, leaning up against the old barn wood, casually sipped on a beer, and watched her lay down and chew her cud slowly. Secretly, I was wishing a water bag would just come popping out of her back end. But it didn't. So instead, I fell asleep next to her in the heat of the day and in my dreams, contemplated this decision I'd made to become a dairy cow owner.

That night, as I got up at 3:00 a.m. and trudged down to the barn with my lantern in hand to check her for the umpteenth time, I decided to call the vet. Her past two calves have come right on her due date. Why not now? Why, God, WHY?!?!

Dear Dr. Vet, I'm a first time dairy-cow-owner-calver who's obviously too inexperienced and nosey for her own good. Would you please swing by and stick your hand up my cow's rear end to make me feel better? Please and thank you.

But before I tell you what the vet discovered, I want to share with you my experience about watching for a cow in labor. Because as I sat there staring at Sally for, like, a million days, I spent a lot of time on my phone looking up the exact things I should be looking for. And so, I present to you, the list of arbitrary, semi-consistent, totally differing, unique circumstances surrounding a cow's calving:

How To Tell When A Cow Will Calve

Sure. Maybe her vulva gets swollen. But maybe it doesn't. Some cow's have larger vulvas than others and some cow's vulvas remain a consistent size, while others really stretch with the pregnancy. Also – one must really know what her average vulva looks like in order to compare it with a swollen vulva. Do you know what your cow's vulva looks like? Ya. Didn't think so. By the way, it's the size of a small dinner place. So stick that one in your back pocket.

Oh. And some cows get nice and prepped for calving with mucous. Others never do. Just a helpful tip for ya there.

Sounds good in theory, no doubt, as loose ligaments will often indicate that a calf shall arrive in 12-24 hours (it's the cow's way of loosening her pelvis for the passing of the calf through the birth canal). Theoretically, the pin bones (that is, the back part of the hip bone) “drop”, becoming loose like a rubber band.

Any idea what I'm talking about?

My thoughts exactly. I love my cow, but I'm new to this whole dairy-cow-calving thing. So even with pictures as a reference, this pin-bone crap made no sense to me. Ashley was so patient with me, messaging me back and forth as I tried to figure out what in the blazes she was talking about. Pin what? Ligament who?

I'm a visual learner, what can I say. I just needed someone to come and point them out to me. Oh, and by the way, this is supposed to be the most telling sign with regard to the onset of calving.

Let's just pretend like I didn't tell Ashley at least 6 times that her pins had ‘for sure' dropped and get on with our lives.

Well which is it people? Your killing me! “My cow didn't poop for an entire day before she had her calf!”… “My cow had severe diarrhea… a sure sign of calving!”… “You'll know your cow is going to calve when her poo becomes like frozen biscuits instead of frozen pies!”.

Whatever. I spent an entire day with my nose in cow pies trying to read into the texture, viscosity, and contents. I'm over this theory.

As I waited anxiously for Sally to calve, every time I saw her out in the pasture grazing, I got angry. Sally! You're not supposed to be eating! Quit snacking! Good Lord, you've got a calf to deliver woman! Get to it!

One can expect their laboring dairy cow to remove herself from the herd and cease all consumption of foliage. Unless of course your like my friend Quinn, who's cow was still grazing with a calf half hanging out of her backside.

5. An udder full of colostrum.

…unless she's a heifer, because then, her milk might not come in until later. And unless she doesn't bag up until a couple hours before she's about to calve, because some cows are like that. Also, she can start bagging up as early as 8 weeks before actually calving. So basically, sometime before she calves and after she calves, her udder will bag up. Ya. A really big helper this one is.

Sally's udder has been full for over two weeks now. If anyone is curious.

Let's sum up what we've learned, shall we?

– The cow may or may not have a swollen vulva and mucous before calving.

– The cow's pin ligaments will drop. And if you know what the hell a pin ligament is, that'll be really helpful.

– The cow will stop eating. Unless she doesn't.

– And lastly, the cow's udder will at some point in the process of this pregnancy and/or calving fill up.

Now that we've established what it is we are, or aren't, looking for, let's flash back to the vet's visit. Lucky for me, the vet was kind and obliged to swing by the farm (for a few zillion dollars) to give me some peace of mind. He took pity on me, I think. But that's okay. I'm not above pity.

When he came, he rubbed Sally's back and called her sweetie. I already loved the man.

He squeezed milk out of her full teats and checked the viscosity of the milk. Not quite thick enough to be colostrum yet… she needed more time to build that up.

He palpated her rectally to feel the calf who, to my great relief was a) in there and b) alive and active. But the ol' calf was waaaaay down in her belly still. The vet explained that 3, 4, or 5ish days before calving, the calf will become locked and loaded in the birth canal. Our little baby was not quite in the right position for calving quite yet.

Guessing when a calf will come is just that. A guess. Best as the vet could tell, Sally was still a couple of weeks out. Or she could go tomorrow.

But don't fret. I have a theory: When Hiro arrived on our farm August 28th, he immediately mounted Sally who had been tied up, lest she continue to run away from him and not let him mount. After that initial breeding, we saw no further activity between the two for his remaining six weeks here. Great! No heat = pregnant.

…unless of course the two of them secretly ‘made love' while we were fast asleep or away in town getting iced breves. Which seems to have been what happened. If Sally didn't catch on her first cycle with Hiro (the August 28th cycle) then that means she caught on her second cycle with Hiro (somewhere 2 1/2 – 3 weeks later). Which means if she was due on June 6th from the August 28th breeding, she is now due somewhere between the 20th and the 27th. Ish. Sorta. Kinda. Hopefully.

Aww. Who am I kidding. There's a confirmed baby in there who will come out eventually, at some point.

ALL THAT TO SAY, I now know where the pin ligament is. And that cows sometimes like to breed in privacy. And that knowing how to tell when a cow will calve is part science, part magic, and part faith.

You never quit learning my friends. 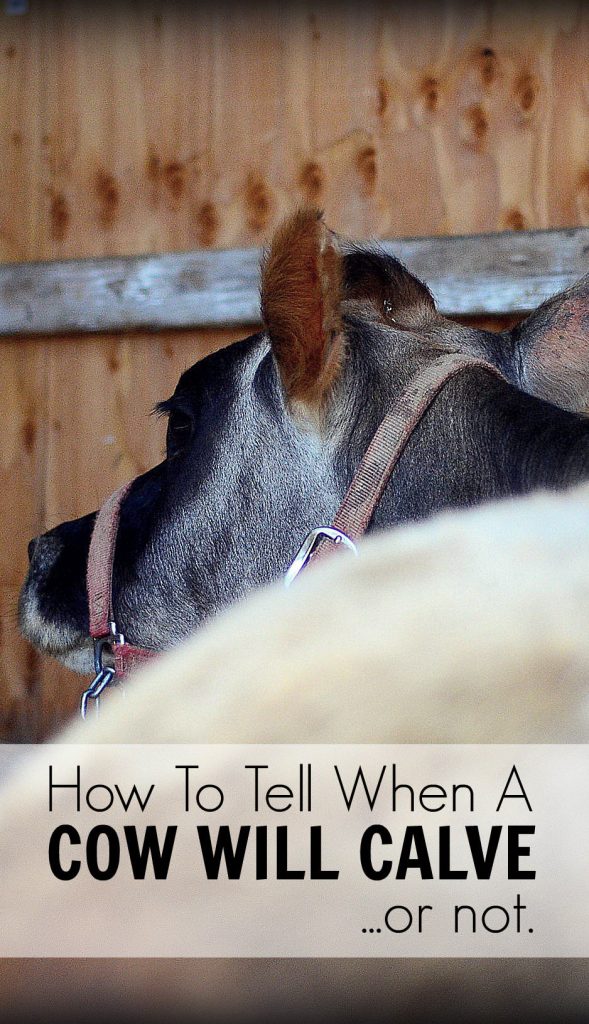 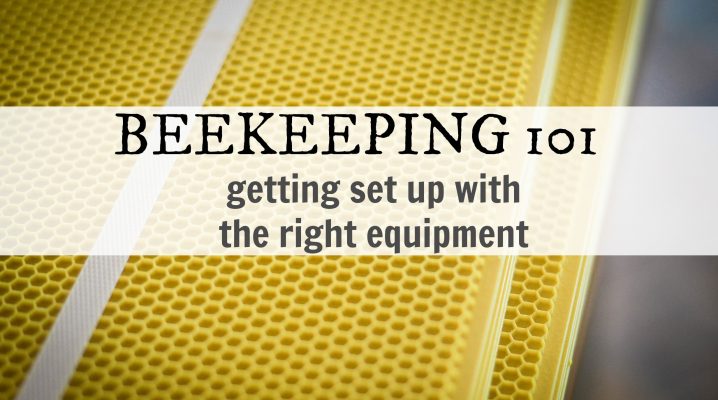 Beekeeping 101: Getting The Right Equipment

I’m pretty excited about this post, my friends. This one has been a long time coming. I’ve been lusting after the possibility of having our own honey bees for years…

Wondering what my kids do all day while I’m gardening? Here’s how they live childhood unplugged. Make sure to follow us on YouTube for weekly videos from the cottage. If… 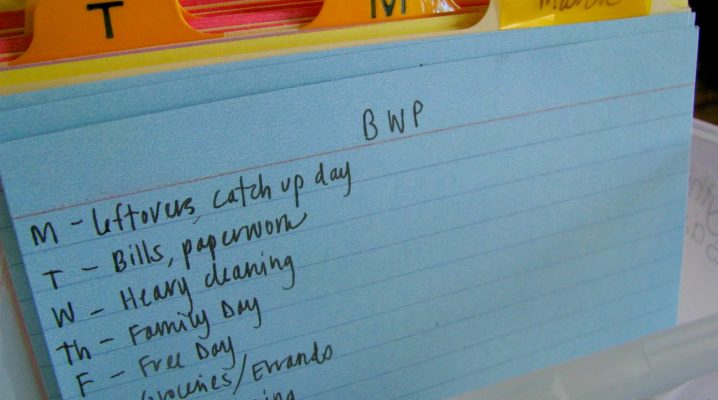 Moving into a new house has its privileges.For example, new window treatments for the bedroom.Because the walls were already painted a pretty (not overwhelming) golden yellow, we decided to put…